Seeing the information come out of this week's HCL "Golden Ticket" event has got me thinking about some of my wish-list items for Domino development, mostly in the form of enhancements for existing capabilities and entirely around Java (since that's what I do).

For some reason, the lotus.domino classes ship without Javadoc or even variable-name information, leading to this trainwreck: 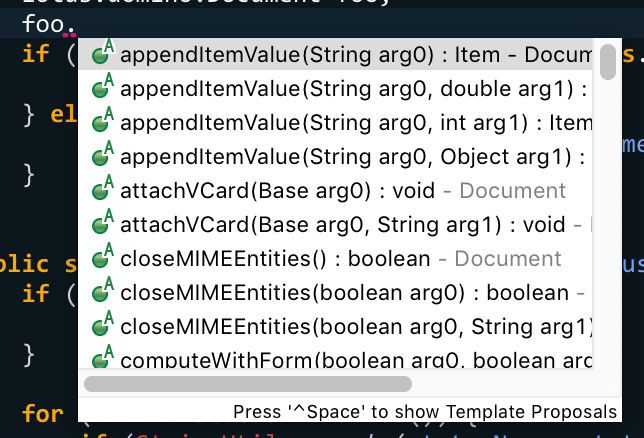 Designer has its built-in help, which is also on the web, but that's quite a few steps down. This is table stakes for a Java API and always has been.

Back in 2014, the XPages team uploaded a clean p2 repository of the XPages artifacts to OpenNTF, corresponding with the 9.0.1 release. This repository saves a ton of hassle when building Tycho-based projects or just setting up an Eclipse workspace. However, it's quite long the tooth, as there have been several Notes.jar additions not included in there, and, in FP10, a significant upgrade to the undergirding OSGi framework.

I ended up writing a script to generated an updated version, but I don't have the legal ability to publish the results anywhere for easy consumption, meaning it has to be done manually and configured for each build environment. It would be a great convenience if there was an official package (ideally including the Designer plugins as well) and, even better, hosted on OpenNTF so that we could reference it by URL as we do for Eclipse releases (and require users to accept a license first).

The p2 repository is good for Tycho-based projects, but, especially when targetting Domino is only one part of a project, it can be much more convenient to use "normal" Maven projects with maven-bundle-plugin. However, those projects can't use p2 repositories as such. For Darwino's needs, I ended up writing a tool in the (available-for-free) Darwino Studio plugins to Maven-ize a Domino p2 repository, but that hits the same snag as above of requiring manual setup in each instance.

This is another case where my preference would be on the OpenNTF Maven repository (plus Javadoc Jars, naturally).

The latest Extension Library release on OpenNTF is from FP9, while the latest on GitHub is from the FP7 era. FP10 shipped with a newer version of indeterminate nature. It'd be good to have this on both of those sites and, like with Javadoc, have source bundles shipped with the product in a way that is picked up automatically by Designer and Eclipse.

The source for the undergirding Equinox stack is available, but it would be best to have, as an adjunct to the updated p2 repositories, the source bundles for the actual versions used so that we don't have to cobble together a platform from Eclipse's repositories.

Open-Source the Rest of the Stack

Having XPages, the Expeditor husk, and the other miscellaneous doodads that make up the proprietary layer as open source with an Apache-compatible license would cover a lot of the above and also be of tremendous use for XPages and non-XPages apps alike that run on or with Domino. I have a hard time imagining that it would lead to a lot of community-driven improvement, but it may do some (I'd have a few words to share with the file-download control, for example), and even just as a static release would be a significant boon.

An idea I've been toying with lately is to make an Eclipse plugin that allows you to add Domino servers to the "Servers" view and control them to some extent. The basics would be to start/stop/restart HTTP, but the stretch goals would be to open a console view, get a list of running modules, integrate with the existing "load bundles from PDE" support, and, ideally, an outright "Run on Server" command for OSGi bundles and NSFs. However, I have so much on my plate that I'm not sure that I'll get to this any time soon unless I get a real itch some weekend.

Feature Pack 8 brought Java 8, a vital step forward. However, since then, Oracle moved to a faster release cycle for Java and the JRE is now at version 10. Domino uses IBM's JVM variant, J9, which they recently moved to the Eclipse foundation as OpenJ9, where it has... sort of been keeping up, I think?

In any event, this increased pace of change has meant that the Java 8 honeymoon is over, and Domino development again requires special consideration when using current tools. I have no idea how complex the integration between Domino's tasks and the underlying JVM is, but my ideal would be to have constant or near-constant parity.

After the JRE version, the most important foundational element of a Java web app is the servlet API release. The current version is 4.0.1, while Domino supports 2.5 (or 2.4, maybe?). The good news is that the Java/Jakarta EE world seems to be used to lagging versions here, and 2.5 is a minimum version for a lot of current tech in much the same way that Java 6 was until somewhat recently, but there has been quite a bit added in recent years.

Presumably, a reason for the lag is the implied requirements of newer versions, such as WebSockets and HTTP/2 support, that would require heavy modifications to the core Domino HTTP code. Honestly, the more practical route is almost definitely to just use a different JEE server paired with CrossWorlds, some Java wrapper for the GRPC stuff HCL has been talking about, or (best of all) a Darwino app replicating with Domino, but still. WebSphere Liberty is actually really nice, by the way.

Like with the underlying JVM, the Feature Pack 10 update to a Neon-based OSGi/Equinox framework was a critical shot in the arm for the platform, but it is now also two major versions behind. This is a little less critical, since Equinox brings a bit less to the table for our needs and Neon is "new enough" for now, particularly on the server side, but it'd still be proper to keep pace.

The Equinox framework that Domino uses is quite capable, but there's no pretending that OSGi-targetted development has its share of headaches. Most Java apps just target plain-old .war files and don't impose any particular requirements on the build process. Java development is a much more pleasant experience when you can just toss in any Maven dependency and not have to think about building a target platform for Eclipse or jumping through bundle-resolution hoops. I really like OSGi in theory, but I can't pretend that non-OSGi development isn't much smoother.

Domino technically supports "regular" servlets currently, but, uh, here's a snippet from the current documentation on that:

JAVADDIN/DOTS added a lot of EM hooks, but it doesn't cover the full suite of capabilities that a C addin can provide, such as authentication handling. Having this be fully accessible from Java would be useful even when treating Domino just as a data store and not as an app server.

I'm sure I could come up with more, but that's probably good for now. All easy, right?

All that...plus Java version of DSAPI and we are all set ;-p