While working on the view indexer thing (which seems to be taking the form of "yet another SQL exporter for Domino", but with some advantages), I started thinking about how I often want a nice, quick way to edit some views, forms, or stylesheets without having to launch Windows and Designer. The Mac client is there for views, but the experience still leaves something to be desired. In addition, I do very little lately that's intended to be seen directly in the Notes client - most views are set up as data structures to be used in XPages, yet the default editor dedicates about half of its real estate to actions and a completely unreliable visual preview area and only lets you work with one column's settings at a time (other than position and width). Same goes for forms - many of them lately are just the equivalent of schemas, with the client appearance being almost irrelevant.

So, to scratch my itch, I've started making myself another XPages app: 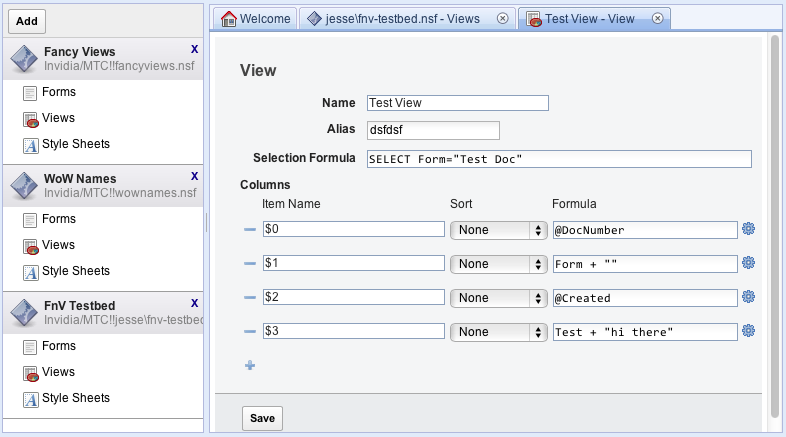 This has the side benefit of giving me an opportunity to make a UI entirely composed of Dojo layout widgets - I've used them frequently, but not exclusively in a site. The dynamic tabbed panel stuff is pretty cool.

I'm trying to be careful about how the editing happens. Rather than building an object structure from the DXL and then writing out a new DXL document to import - risking deleting any additional attributes that I don't care about - each design element wrapper class works directly on a DOM version of the DXL document, so that anything that it doesn't touch remains when it's imported again. That should allow me to edit existing forms without worrying about destroying the layout - any new fields can just get tacked on to the end, or maybe in a generic table structure, while the rest of the layout remains the same.

I don't know how crazy I want to get with it (I could, for example, make it so that you can allow non-Designers access to modify specific design elements per-DB), but it's a fun little project nonetheless.

I've always wanted a 'sql-like' syntax for creating views.  something like

so much easier to edit code like that then using the Notes UI.