TL;DR: You can install JSF tools in Designer to help out quite a bit with faces-config.xml editing, but there are bugs that may require changes in Designer's code to fix.

I was having a discussion about Andrew Magerman's recent on-point jeremiad about SSJS and the topic got to the difficulty of using Java in XPages if you don't already know the ropes - creating classes, managed beans, etc.. I looked around a bit for examples of how other tools do it, and I found this page on using the Web Tools Platform (WTP) plugins in Eclipse for doing basic JSF development. Looking through the tutorial, you can see parts that don't apply to XPages (the stuff about locating the tags and creating JSP elements), but some parts clearly would, such as the faces-config.xml editor. Mid-lamentation about how this isn't available to us, I noticed the date: June 18, 2007. "2007?" I said to myself. "Why, that's even older than Designer!"

So I set out trying to cram this stuff into Designer. The first step was to find a version of WTP that would work with the base version of Eclipse used in Designer - Ganymede, or Eclipse 3.4. I found an archived build of WTP version 3.0.5, which fits our needs. Unlike most Eclipse plugins, the download lacks a normal site.xml file, so I dropped the features and plugins into their respective folders in <Notes Data>\domino\workspace\applications\eclipse.

The next step was to install the prerequisites. To do that, I added the standard Ganymede Update Site to Designer in the File → Application → Install screen with the name "Ganymede" and URL "http://download.eclipse.org/releases/ganymede/". I found everything I could relating to the core EMF, EMF XSD, GEF, DTP, and their SDKs. Once I had them installed and I restarted, I went to File → Application → Application Management to find the category containing the WTP stuff, the "Java EE Developer Tools": 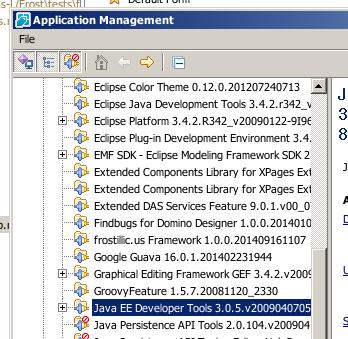 For me, it was disabled by default, so I had to click the "show disabled" icon (the third in the toolbar) and then select and enable it. If you're missing any dependencies, it'll tell you, though it'll give you the plugin ID instead of a friendly name. Fortunately, it's usually easy enough to match the friendly name to what you need from the Update Site. Everything is in there, in any event.

Once that stuff was enabled (and I restarted Designer), I still had the task of actually enabling the tools for an NSF project. Normally, you'd create a new Web Project in Eclipse and it would come pre-configured, but that's not how it works with NSFs. There's supposed to be a way to enable the features after the fact to an existing project ("Project Facets"), but I found that that didn't even show up until I took a couple steps first.

To find what I needed, I created a new Web project (New → Web → Dynamic Web Project) with the "JavaServer Faces v1.1 Project" configuration: 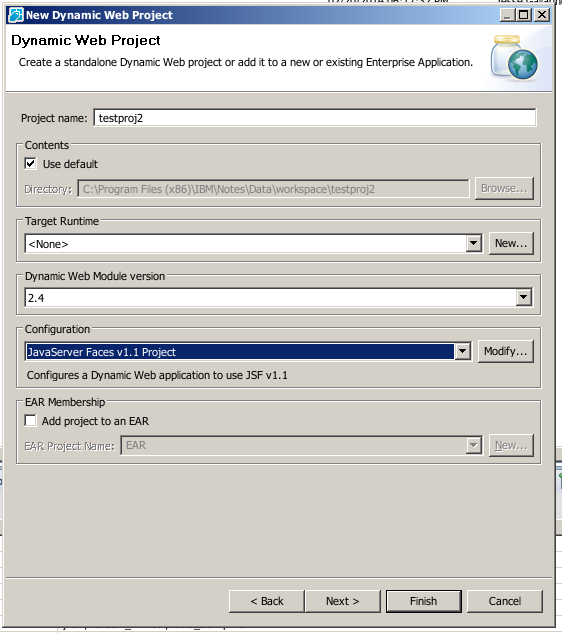 Then, I went to copy some of the project settings from that project into the NSF. To do that, I enabled displaying dotfiles in the Package Explorer (the "sandwich" icon → Filters... → uncheck ".* resources") and then opened ".project" inside the newly-created project. From there, I copied some lines from the natures node of the XML and pasted them into the same place in the ".project" file for the NSF:

I also copied two files from the ".settings" folder of the new project to the one in the NSF:

Once I did that, I was able to right-click on the NSF project, go to Properties, and see "Project Facets". In there, I selected the "JavaServer Faces v1.2 Project" and then clicked the "Further configuration required..." link that sprouts at the bottom. I tweaked the settings slightly to match the NSF layout, namely the source folder: 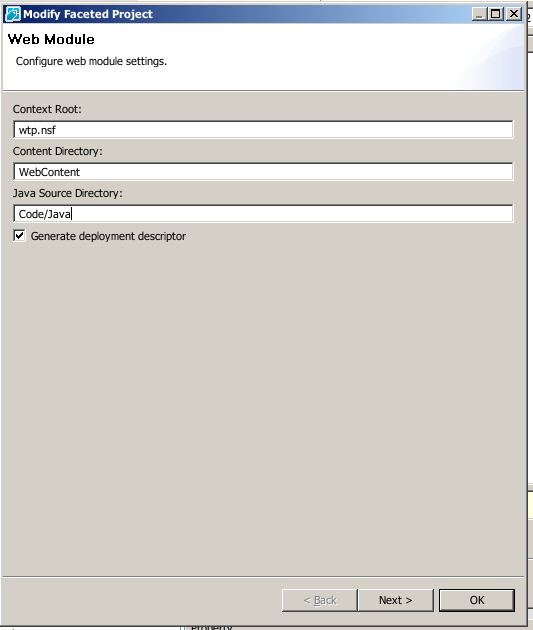 Then I hit Next and... nothing happened. Or, more accurately, an NPE was thrown out to the OSGi console. That appears to happen sometimes and I'm not sure what triggers it, but some combination of re-opening Designer and re-copying those files seems to help. Who knows?

Once the Next button DID work, the next page was fine, so I hit okay. When I did that, Eclipse got to work JSF-ifying the project, creating stuff like web.xml and MANIFEST.MF files we don't need. Those aren't important (I wish web.xml was important), but they're not everything it enables: the cool thing that you get to use is the faces-config.xml editor. Since the DB I created used an older, pre-Framework-and-@ManagedBean version of my XPages Scaffolding project, it came chock full of values already filled in: 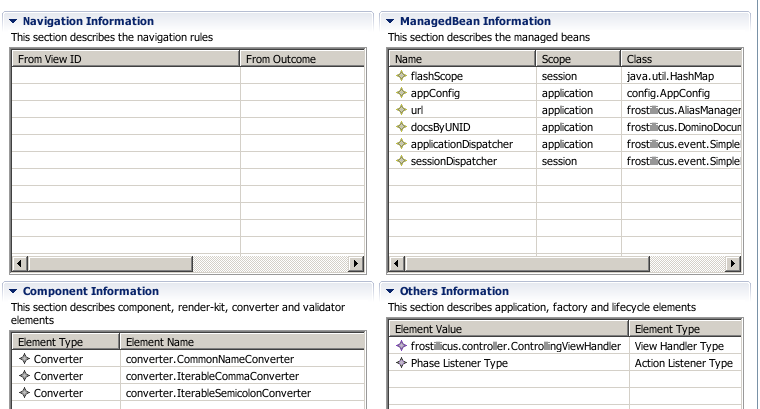 And it's not just viewing what's there. The editor comes with tools for letting you create each of these elements. In some cases, it's just a Java class picker (which on its own is valuable due to not having to remember the XML element name), but in others it's much more complex. Managed beans are a perfect example - the editor lets you create beans based on either an existing class or an inline new class (make sure you pick the right source folder), it recommends a name for you (for if you're lazy), and even lets you specify the different types of managed properties, the names of which it picks up from the getters and setters in the class (!): 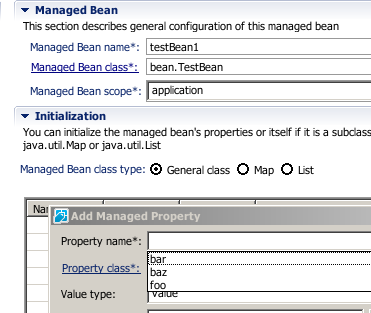 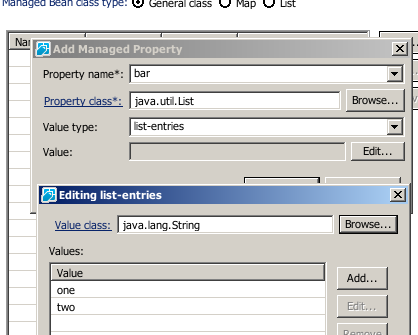 So this is pretty cool, huh? Should everyone just drop it into Designer and lead better, more-productive XPage-developing lives? Well... not quite. Aside from the fact that we can't use all the other goodies from the tool set (like the JSP editor) and the parts that the tools don't know about (like view-scoped managed beans), there's a problem wherein part of the configuration needed to support the editor is reset whenever you close and re-open the NSF in Designer. I've been able to track down changes it makes to the .settings/.jsdtscope file, but just fixing that isn't enough to make it work again (or, if it is, it takes a project re-open to refresh, which defeats the point). The upshot is that you need to go through that project-facet setup every time you open the project. The editor also doesn't open up when you open faces-config.xml from the "Applications" view, only the "Package Explorer" view (well, presumably any non-"Applications" view would do).

This is where the feature request comes in: I think this sort of thing should be in Designer (better: the XPages/VFS bits of Designer should be in stock Eclipse, but that's a larger project). There's a lot standing in between us and using all of the available web tools, but even just the faces-config.xml editor would go miles toward making Java palatable to legacy-Notes developers, and would even be a nice quality-of-life improvement to those of us who breathe Java daily. The first step to improving XPages app development is to make it easier to do the right thing, and this would be a big step in that direction.