When working on an XPages project, my development environment is generally set up like so:

This has proven to be a fairly comfortable setup, particularly ever since Serdar added the ability to use a remote workspace to the XPages SDK. When I make a change in the plugin, I only need to restart HTTP on Domino and all is well.

But there's been one major annoyance: if I change a method or class that I use in in-NSF Java, I have to install the updated plugins and restart Designer, which is a big distruption to my flow. Even if I was using Eclipse on Windows with the old method of running Designer out of Eclipse (if that even still works), it'd still involve a restart.

Today, though, I realized that I've been doing it the dumb way all along. The reason is that I've been conflating the two aspects of an XPages Library plugin when it comes to Designer.

The first aspect is to tell Designer-the-IDE that an XPages Library named, say, org.example.XspLibrary is available for use in XPages applications, and that it's associated with the plugin org.example.plugin. This is provided by the plugin being installed into the running Designer environment, and absolutely needs a restart when it changes. Designer uses this information to compose the OSGi pseudo-project that makes up the NSF in the workspace (by adding it to the plugin.xml historically and the MANIFEST.MF in 9.0.1 FP10+).

The second aspect is that the plugin is then available in the Target Platform. The Target Platform is an OSGi-ism basically meaning the OSGi runtime's view of the world - in Eclipse, it means the plugins that Eclipse knows about and which can be referenced by projects, such as the NSF. This doesn't have to be related at all to the running platform - and, in fact, it's common in OSGi development to have an entirely-distinct target platform to properly represent a server or other runtime environment.

The reason that these aspects are comingled is that, by default, Designer is configured to have a default Target Platform that's based on its runtime environment and any installed plugins. We, as XPages developers, thus generally don't have to think too much about it. "Install the plugin in Designer" is the single step that handles registering the library and making its classes available.

However, the platform is just a setting in the preferences, and it usually looks something like this: 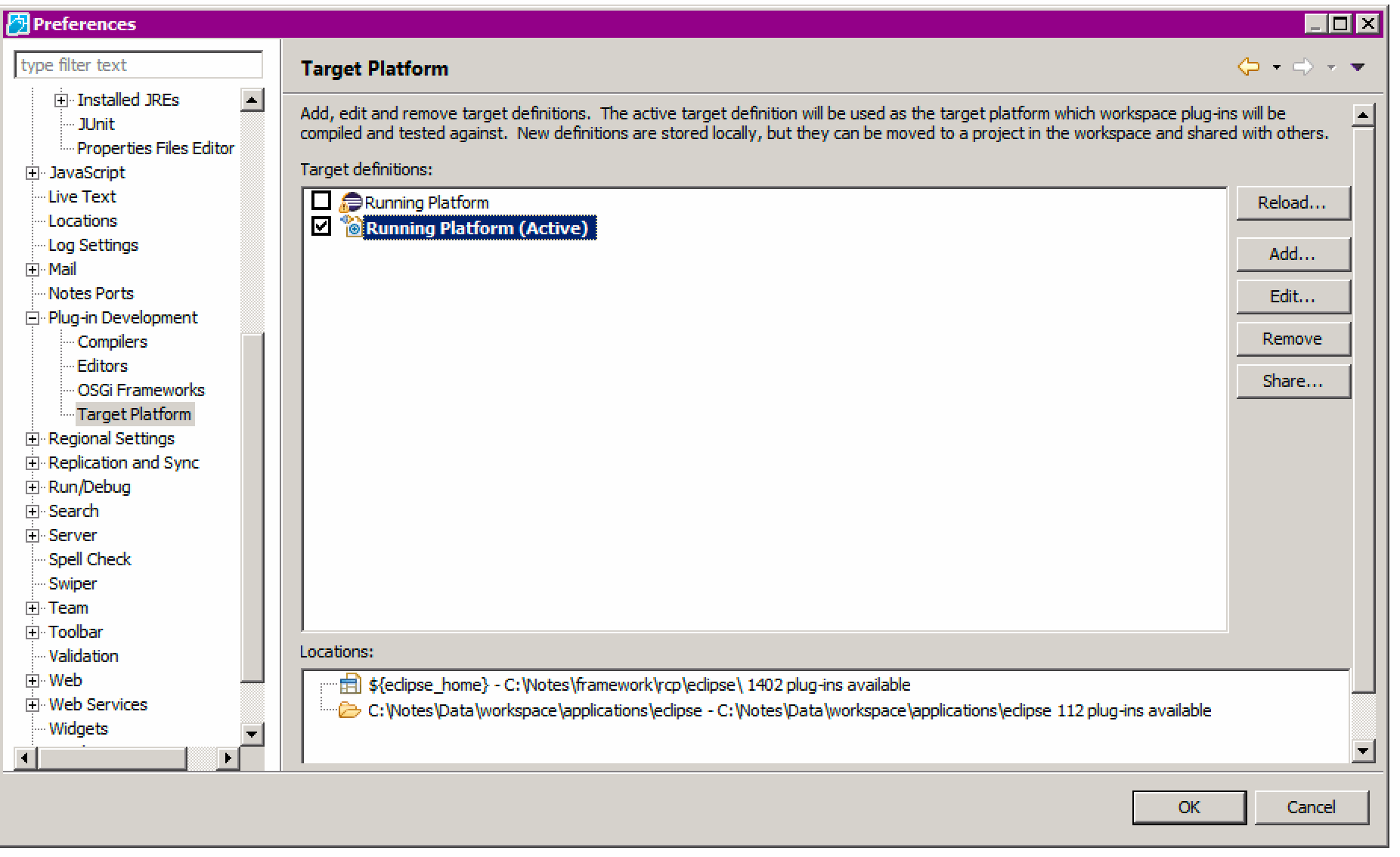 Since it's just a setting, and one that is commonly modified in Eclipse, there's nothing stopping us from modifying it. That's where I realized I was doing it the inefficient way all along. So I modified the active platform to point to the target/site folder of my update site Maven project: 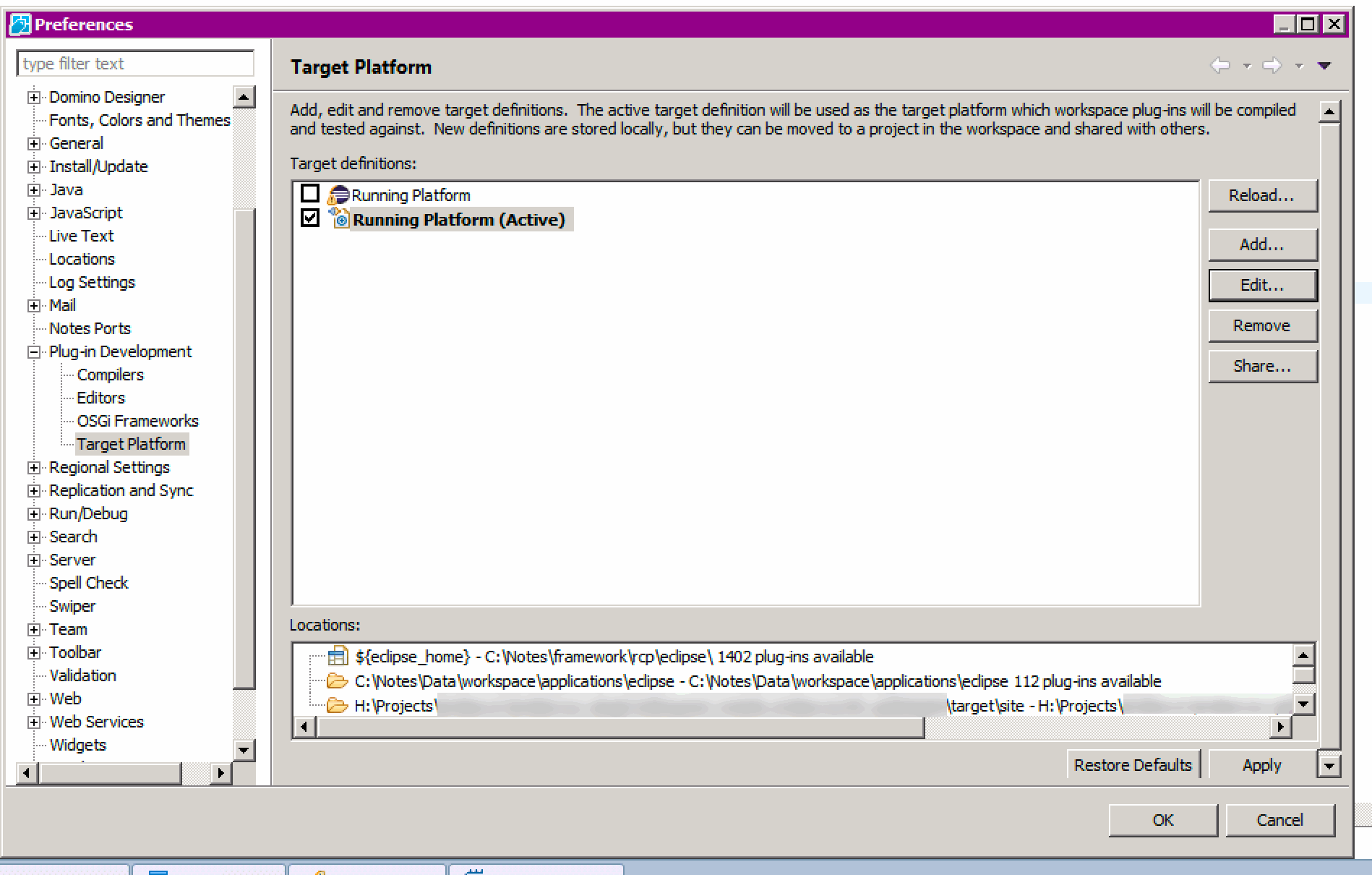 With that change, Designer will see both the installed version as well as the latest results of the Maven build. So now, I can do a Maven build and then, in this dialog, click "Reload..." to get Designer to notice the changes. Once I do, voilà - the new methods/classes show up and I don't have to restart and lose my workspace state.

Do you know if this work for changes to XPages Controls as well?

If it does I will be so happy

I haven’t checked, but my guess is that it wouldn’t - those are presumably all loaded by the installed plugin contribution.