In today's post, I'm going to go over a handful of features that IDEs, particularly Eclipse, bring to the table to improve the development experience. Some of these aren't unique to EE development, but our use of Maven and standardized technology makes them better than their equivalents in XPages development.

In Eclipse, if you right click on most anything in a Java file, you can choose "Open Declaration" (or press F3 with the text cursor inside it), you can go to the source of whatever it is, if available:

This also works in Designer, but it's often much more useful here: because Designer ships without source for its JVM or really any of the classes that make up the XPage stack, you tend to be greeted by the white "here's a bunch of bytecode" screen, which is rarely particularly useful.

Since we're working with open-source components and we told Eclipse to download source and Javadoc for Maven artifacts, though, almost everything will have available source, letting you explore what's happening much more easily.

This will also work for your own code, making F3 an extremely-useful method of navigation. While you're there, try out the "Open Type Hierarchy" and "Open Call Hierarchy" options too.

CDI's technique of using @Inject to inject implementations of interfaces automatically is a great way to abstract away the business of doing a new SomethingImpl() or finding the managed bean. However, sometimes it's good to find out where the objects you're getting are actually coming from, and Eclipse lets you do this by holding Command (probably Control on Windows, if I had to guess) and hovering over an interface name:

Note, though, that Eclipse isn't really following CDI logic here - instead, it's just trying to find implementing classes and either opening a single implementation if there's only one or showing a menu to select from multiple. It happens that that's usually the same thing effectively, but it's an important distinction.

IntelliJ is a bit smarter on this point: it will try to figure out all the CDI logic and show a little bean icon on a line with an injection to take you to the object or method providing it:

To be fair to Eclipse, there is a project to provide a great deal of improved Java EE behavior: JBoss Tools. It comes with a bunch of addins, editors, and configurators meant to make Eclipse much more aware of things like CDI's real logic. I personally have found it pretty janky in practice, but it's been a while since I gave it a proper shot. Your mileage may vary.

Since JAX-RS is such a critical part of modern Java development, it comes in handy that Eclipse has some specialized knowledge of it. If you expand the "Services" folder in your project, you'll have a "REST" folder that contains all of your declared JAX-RS endpoint classes and their methods:

You can use this as a general overview of your app's external API (and, when using MVC, its full URL layout) and you can also double-click any of the entries to go to the declaration.

If you get into a situation where you're writing a paired set of a server module and a client module, you can also let Eclipse generate a resource client class for you.

Within the "Deployment Descriptor" node in your project, Eclipse lists a bunch of EE/Servlet stuff: 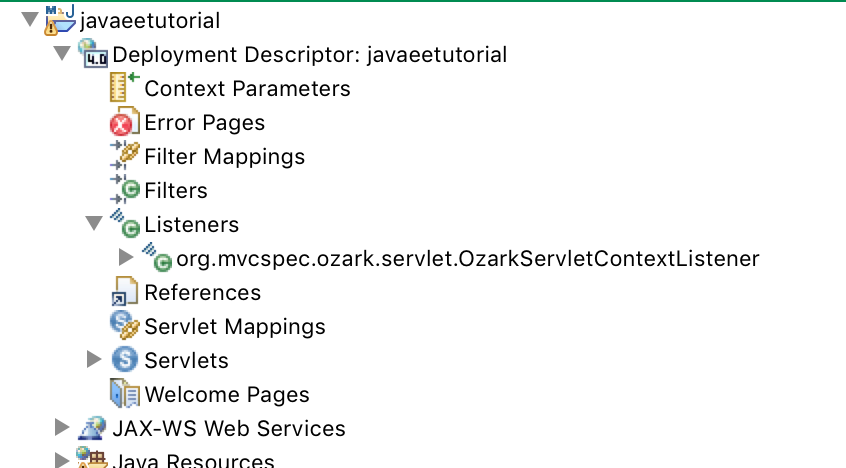 Historically, this referred specifically to the contents of the web.xml, but it also shows annotated classes as applicable - such as the Listener coming from the Ozark MVC implementation. Depending on how you're constructing your app, this may be more or less useful, but it's definitely good to know it's there.

Next time, maybe I'll finally get to talking about users and data. Or maybe I won't! We'll see.