(Opening caveat: unlike some of my other recent dalliances, I don't plan to actually do anything with this one, and it's more of a meandering exploration of the XPages platform)

Since I've been on a real Open Liberty kick lately, over the weekend I decided to go another step further and test something I'd been wondering for a while: whether it'd be possible to run the current form XPages outside of the Domino HTTP stack.

I say "the current form" because XPages's history is long and winding, and led a fruitful life for a long time before being glommed onto Domino at all. If you poke around the core, you can see it bears all the scars of its life: references to WebSphere Portal abound, half of the plugins that make up the runtime are just thin OSGi wrappers around plain old Jars, and all of the "Domino" bits are clearly labeled as "adapters".

Still, it's been over a decade since the stack was intended to run anywhere outside Domino, and that's a lot of time for ingrained assumptions about nHTTP specifically to creep in. Still, I was curious if it was possible to load it up outside of Domino and without OSGi.

There are a couple things that contribute to making this setup practical, and they each bear some expansion.

At a couple levels, the runtime breaks things up into generic concepts of "Platforms" and "ExecutionContexts" to handle some specifics about context directories, class loaders, and other bits. For example, if you get a type hierarchy on com.ibm.commons.Platform in Designer, you'll get a pretty immediate idea of what's going on: 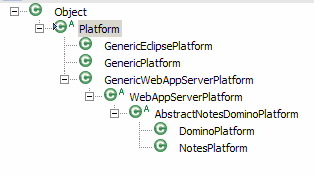 Anyone who has written an XPages Library plugin is familiar with the concept of an OSGi extension: you declare your extension (for our purposes, and usefully, com.ibm.commons.Extension) in plugin.xml and then the environment picks up on it by the code looking for such extensions. The core Java runtime has a similar mechanism - ServiceLoader - that looks for files with the name of the extension type in the META-INF/services directory in your classpath. The result of both is the same: individual Jars/plugins can declare services and some other part of the app can pick up on them without knowing the specifics.

XPages uses IBM Commons's generic "Extension" type to paper over the differences between these, and the runtime will look for both or either depending on where it's working. And here's another part that conveniently still retains the vestiges of its youth: if you look inside the com.ibm.xsp.core plugin (since it's just a ZIP file), you can see these extensions declared both in the top-level plugin.xml and as individual files inside the embedded Jar:

So, if you load in these inner Jars as normal Maven dependencies in a .war file, the services will still tie together in much the same way, at least for the core runtime. Things get less convenient the newer the code is, though: the Extension Library, for example, primarily uses plugin.xml for its services, and so either an adapter runtime would have to look for this or you'd have to re-declare them in the "normal" way.

Speaking of OSGi, that's one of the big potential stumbling blocks. XPages nowadays expects to run inside an Equinox container, and so a lot of code (say, the Dojo plugins) make assumptions about the loading of Activator classes and other things. These need some patching. Fortunately, the actual use of OSGi in most of these cases is extremely light: mostly, it's about instantiating these activators and then getting bundle class loaders. For basic needs, these can just be shimmed in: find the (blessedly public) static instance property in the applicable classes and put in small BundleContext Bundle adapters that just return the context class loader. I'm sure there are bits that run deeper than that, and long-term it'd probably be more practical to just fire up Equinox, but this works for now.

The core work of rendering an XPage runs through the class FacesServlet and more specifically DesignerFacesServlet (as a side note, I've gathered that seeing "Designer" in these classes refers most likely to "Lotus Component Designer", since those parts of the stack enter in before the Domino dependencies). In a modern JEE context, this'll take a little bit of wrapping, since it implements Servlet but doesn't extend HttpServlet, but not too much. For the most part, once you have your platform set up above, you can make a standard @WebServlet-annoted class and delegate the HttpServletRequest and HttpServletResponse objects to one of these, and it'll pick up on any compiled xsp.PageName classes in your .war:

Alongside the core Faces servlet, the DesignerGlobalResourceServlet does the work of, well, serving up global resources. This one's simpler than the Faces servlet, since it is indeed a fully-fledged HttpServlet. You could just declare this in your web.xml, but I like extending these classes in case I want to fiddle with them later:

Up until now, what I was able to create was a way to run XPages inside a normal web app without any real connection to Domino (other than pulling in the binary plugins). Actually running an existing XPage out of an NSF requires a little more bootstrapping, and unfortunately confines the page a bit.

Specifically, the most expedient route I found to accomplishing this was to fire up an LCDEnvironment object and ferry requests for NSF-hosted apps to this. With the presence of an active Notes runtime (via NotesThread.sinitThread() and bringing in Notes.jar and the NAPI plugin), LCDEnvironment#initialize will do a lot of legwork in assembling its own little world inside your application. It will look for com.ibm.designer.runtime.domino.adapter.HttpService declarations and bring them in, including the vitally-important NSFService.

The nice part of this is that it does a ton of work, handling not just XPages requests, but also in-NSF resource requests. The down side is that the NSFService does its work by heavily wrapping the environment, down to providing a servlet context that declares itself as 2.4 even in a 4.0 runtime. Still, a bit of code in the service method gets it working nicely:

Those adapter/wrapper classes really just delegate the calls, but they're needed because that's what LCDEnvironment expects. I imagine those interfaces exist to create a consistent environment in lots of situations without even tying to the stock HttpServlet* classes. In general, the XPages stack loves adapters.

So, Is This A Good Way To Run XPages?

Nnnnnnnnnope! I mean, not really. Particularly in the first route, where you load up an XPage without any knowledge of the NSF part, you have some intriguing paths to interact with the surrounding Servlet 4.0 environment directly from the page. However, I don't know why you would do this. You could hypothetically create some components or hooks to allow use of, say, Web Sockets, but you'd be better off just using current JSF for that, since the work is already done. The in-NSF XPages runtime adds some extra barriers to that, too... I'm sure it'd be possible to provide a path to it, but, again, you'd be better off using existing tech.

Additionally, this isn't a way to bring XPages "home" to JSF. The JSF API and implementation that XPages uses isn't merely old, but hacked to pieces: if you look at javax.faces.component.UIComponent, you can see it's riddled with "_xsp" methods, indicating a thoroughly-unclean layering. You wouldn't be able to shim in the current JSF without forking it into a distinct project.

Still, it's nice to know it's possible, and it sure was a fun project to tinker with. I do admit that the notion of building an XPages app using MVC 1.0 with XPages as the view technology is a little tantalizing, but it's certainly not worth traveling down that road on the back of a chopped-up hacky rework of the platform. And the only reason it's tantalizing is that I'm still more comfortable with XPages than any of the other front-end stacks, and that doesn't itself make it a good fit. Fun to think about, though.

When you only want to use a hammer, even a cucumber looks like a nail.

great work Jesse, I know the theory but I didn’t expect you to really be that crazy :)

Btw... a great framework I love and you should look into is Vaadin. Version 8 is stable. Version 10+ (aka Flow) is the future proof road. I’m getting together the team to use your openliberty-domino + CrossWorlds + Vaadin.

Nice one. Let’s say you would be put in charge to update XPages. What would you change?

Daniele: I definitely have Vaadin in the back of my mind for if I need a new toolkit down the line. The nice thing is that, with a normal servlet container, the "view" part doesn't have to define the entire stack the way the XPages runtime does.

Stephan: honestly, I might just kill it. It could be technically brought around, but it's been so neglected for so long that I'm not sure how worth it it would be to spend the time to do that vs. just making it easier to bring your own toolkit.

I'm said that you feel like XPages should be killed, I feel that it needs a restart, look at the old forms/views and LS agents. I see alot of code being created and renewed there and bringing good customer value.
So I think what do we need is a vision for the future and that is not something new that is in Beta. We need something that has come out of Beta and is maintained!