So, after the last post's large task of converting to Maven, this step is mostly about picking up the pieces and expanding on some of the concepts. We'll start with M2Eclipse, usually rendered as just "m2e".

m2e is the set of plugins that acts as Eclipse's interface to Maven. It more-or-less replaces the earlier maven-eclipse-plugin, though you will likely still see references to that around. Eclipse doesn't have any inherent knowledge of how Maven works, m2e has the complicated task of reading your projects' pom.xml files and adapting them to Eclipse's internal configuration. So, for example, in our projects it saw the presence of Tycho and determined that they should be imported as OSGi projects. In other cases, m2e may pick up the presence of things like Android plugins to trigger the use of the Android development tools.

Though it tries mightily, m2e is the source of a lot of the consternation that can come with a switch to Maven-based development. Because most Maven plugins don't have any inherent allowances for working in an Eclipse environment, adapters have to be written for each one in order for them to work with m2e - this is what the dialog yesterday installing the Tycho adapters was about. In some cases, these don't exist and you have to tell m2e to ignore the plugin; in other cases, the adapters DO exist, but are flawed in some way. Most of the time, things go alright, but there are enough edge cases that it can be irritating.

For this kind of task, m2e is pretty unobtrusive, but it's important to know it's there.

One side effect of m2e's behavior is that it's not a good idea to remove Eclipse's project configuration files from the Git repository. This is not required, but it can avoid a number of annoying problems when dealing with multi-person Maven projects. To start with, open the .gitignore file from the root of your local Git repository (you can get to this easily using Eclipse's Git Repositories view, in the "Working Directory" part of the repo). Add some lines at the end to ignore .project and .classpath, so your whole file should now look like:

Depending on how your (hypothetical) team wants to work, it may also make sense to ignore the .settings/ directory, which stores some additional Eclipse project information. However, some of that information may be useful to share - for example, on-save code-cleaning behavior that isn't readily expressed in Maven.

Due to the way Git works, just adding the files to the .gitignore won't remove them from the repository: instead, they'll just no longer show up in the list for new changes. In order to also remove them from the repository without deleting them from the filesystem, go to the "Navigator" pane in Eclipse (if it doesn't show up currently, you can add it via Window → Show View → Navigator), find each .project and .classpath file in the four projects (some will only have the former), right-click, and choose Team → Advanced → Untrack: 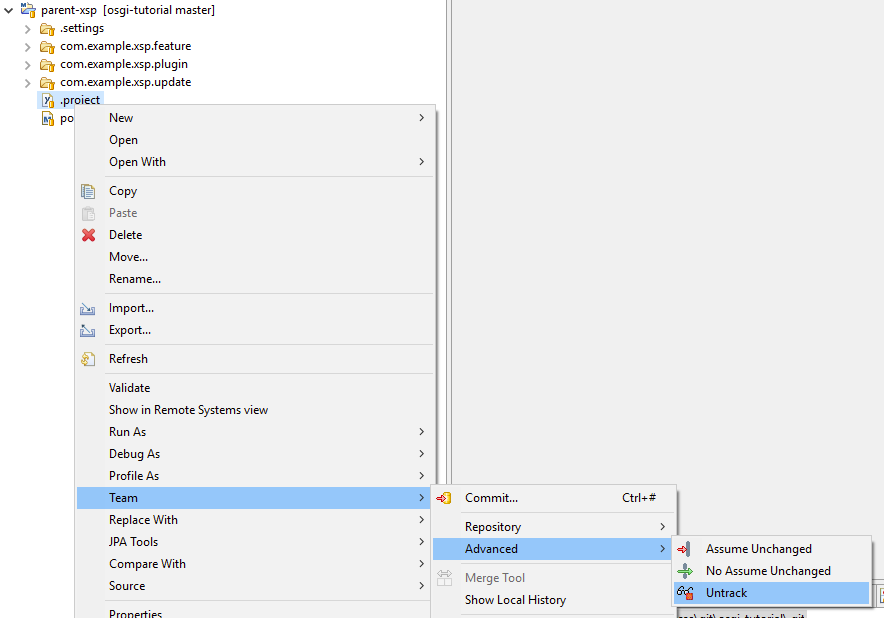 Now, commit the changes - though the files remain on the filesystem, they should show up as deleted in the commit dialog: 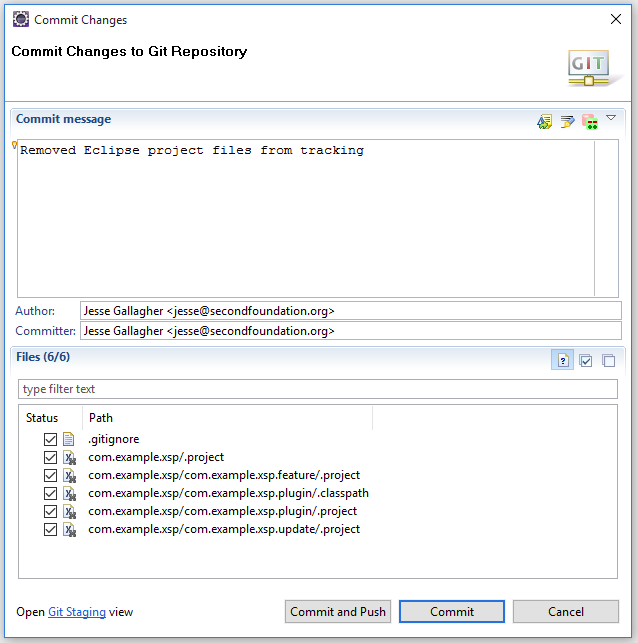 This one is one we've already prepped a bit for. Whereas most Eclipse projects store their binary output (Java class files, Jars, etc.) in the bin folder or elsewhere, the standard Maven behavior is to use target. For most of the projects, this doesn't matter - we had already configured the plugin to use a subfolder here for its classes, and the temporary files for other aspects don't matter. However, it's still important to know about this; when you're looking for the compiled or packaged output of a Maven project, this is the place to look, and we'll run into this when building the update site.

There's an important changed involved now with how the update site is built: it does not involve opening the site.xml and clicking "Build All" anymore. Instead, it involves right-clicking the root project ("parent-xsp") and choosing Run As → Maven Install: 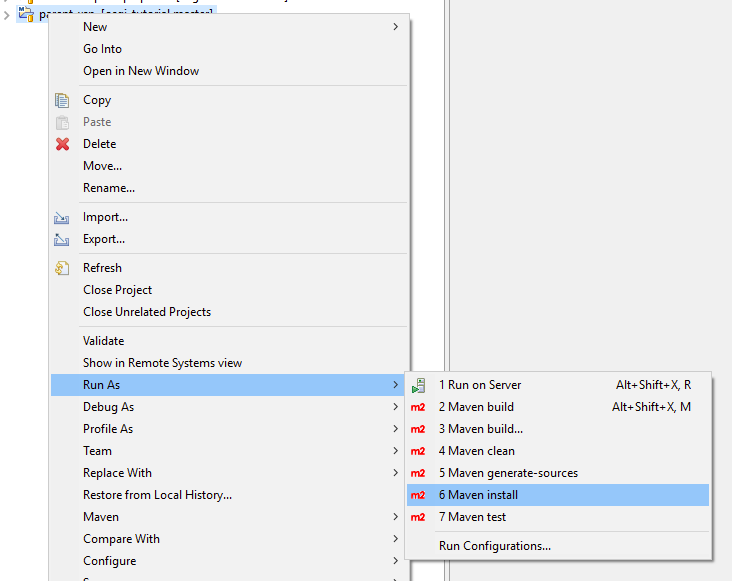 There are two logical followup questions when seeing this change: "what?" and "why?". They're both bound together to what the nature of a Maven project is, and, significantly, the way Eclipse interacts with them. Maven is primarily a command-line tool - granted, it's a set of Java classes, but the primary way to interact with it is via the command line. m2e does a lot of work to interpret the projects in the same way as the `mvn` command-line tool, but it's just a secondary interpretation due to the way Maven and Eclipse work.

The way to fully build a Maven-ized project in a way that fully uses the configuration is to run the command-line tool. Fortunately, m2e comes with its own embedded version and doesn't require you to use a terminal, but the abstraction is very leaky - and this is why you use "Run As" instead of any of the normal "Build"-related commands. The "Run As" commands construct a CLI-type environment and execute the embedded Maven, which is what then does the real work.

Since "parent-xsp" is the root of our projects, it's the starting point to execute a Maven build. When you run this, you'll see a lot of chatter in Eclipse's Console view, particularly the first run: Maven will seek out the plugins needed to build the projects and install them to the local Maven repository (stored in ".m2/repository" in your home folder). After that, it will build and package each of your projects. There's a whole phase system going on here (similar in concept to the XPages lifecycle), as well as many configuration options, but the important part here is that the "install" command (called a "goal" in Maven parlance) is the last phase that we will worry about, and it will cover everything we need here.

Upon completion, the Console text should end with something like this (incidentally, "Reactor" is Maven's term for the entire blob of modules being processed):

Part of this process is the cration of the update site, which, due to how we configured it, will be represented twice in the "target" folder in "com.example.xsp.plugins": as a tree of files inside the "site" folder and also zipped up into the "site_assembly.zip" file. There's also a file named "site.zip", but that contains just the site.xml, which is not important. It's these files that you should now target with Designer and the NSF Update Site when updating the plugin. In fact, it'd be a good idea to delete the "features" and "plugins" folders from outside the "target" folder now - they won't be used any more.

As for the "Build All" button in site.xml, it's best to pretend it doesn't exist. It will still work, but it will break your Maven build, because it overwrites the "qualifier" in the version numbers. This is, admittedly, a drag: it's convenient having a clear, logical button to build the site, and it's very inconvenient that Eclipse doesn't tell you not to use it any more. However, the Maven process, besides being now required, has a nice advantage: now building the update site will no longer cause Git to want to check in the change. That's something that can get annoying very quickly when working with another developer on a non-Mavenized OSGi project.

Adding Back The Source Plugin

We'll finish the day on an easy one: adding back in the source plugin. Unlike the original setup, which used a separate feature to house the source plugin, we'll now include it in the same feature. You could also continue to have a separate source feature, which would be useful for very large projects where it would actually be a big burden to deploy the source to servers, but, for XPages libraries, it's generally not worth the cognitive hassle.

Since we already configured the Tycho source plugin earlier, this is just a matter of adding a reference to the (implied) source plugin to the feature.xml:

Now, the source will be included in the output and bundled with the main feature when it's installed. Commit this change: 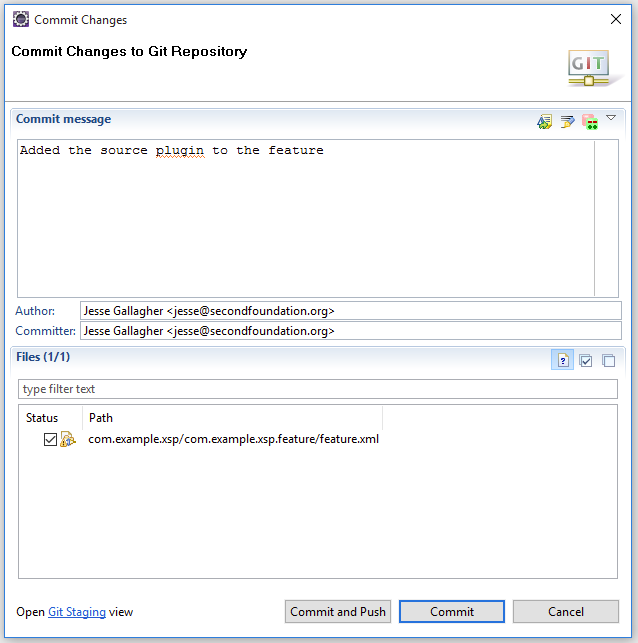 At this point, we're basically back to where we were previously, OSGi-wise, but in a much better position to scale the project further and take advantage of supporting systems. The next couple posts will cover some of those potential systems, as well as remaining large conceptual topics. There's a great deal to know when it comes to Maven, but it's all helpful.