For today's step, we'll deal more with the meat of the task: putting your own code in the plugin. There are a lot of options for what a plugin can provide, ranging from just storing classes to be accessed from elsewhere to being full-on OSGi web applications. Adding a managed bean certainly falls on the simpler side of this spectrum, but it's also one of the most common uses. These steps should also be very familiar if you've created a managed bean in an XPages NSF before.

Before we get started, it will be useful later to access Extension Library code from this plugin, so there's a quick detour. In order to allow the plugin to "see" ExtLib code, the appropriate ExtLib plugin needs to be added as a dependency. Go to the MANIFEST.MF file's "Dependencies" tab and add com.ibm.xsp.extlib to the list:

Now, create a new class with an appropriate name by right-clicking on the src/main/java folder and selecting New → Class as before. Set its package to "com.example.xsp.beans" and its name to "ExampleBean". You don't have to name your bean classes with "Bean", but sometimes it makes sense. Make sure to add the java.io.Serializable interface via the "Add..." button in that section. 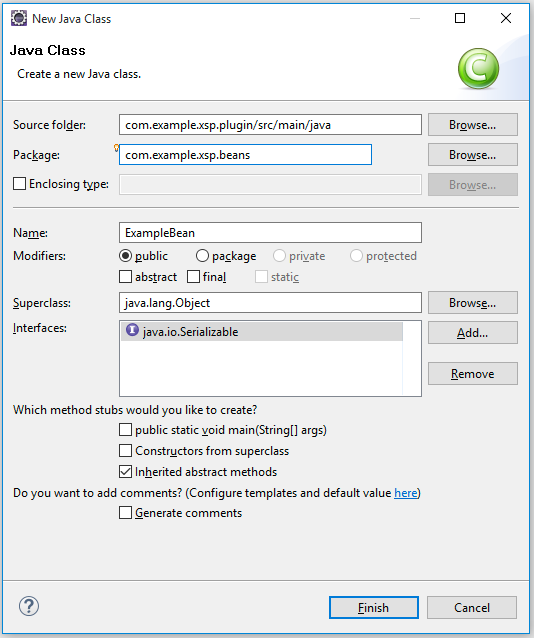 When you create the class, Eclipse will put a squiggly underline beneath the class name, indicating that it has a warning for you. If you hover your cursor over it (or hit Ctrl-1 while the cursor is on the line), you'll get more information and an option to fix it:

What this message is talking about has to do with serialization - the process of storing the Java object outside of memory and retrieving it later - and is something that would come up more in applications that intentionally store data long-term. For a thorough explanation of this and many other things, I can't recommend Effective Java enough. For our purposes as XPages developers, though, it's fine to pick the "default" option - we want more classes Serializable than other Java apps, but we care less about their long-term storage.

Next, add a basic "getter" method that returns a String we can see later, as well as a static method to retrieve the bean from the XPages environment from Java:

Now, in order to make this a managed bean, well have to add a local faces-config file. These files have the same format as the one in the NSF. There's another nod towards Maven here: we'll put the XML file in a separate "resources" folder in the project, which is where Maven expects to find this sort of thing. Right-click the project and choose New → Source Folder: 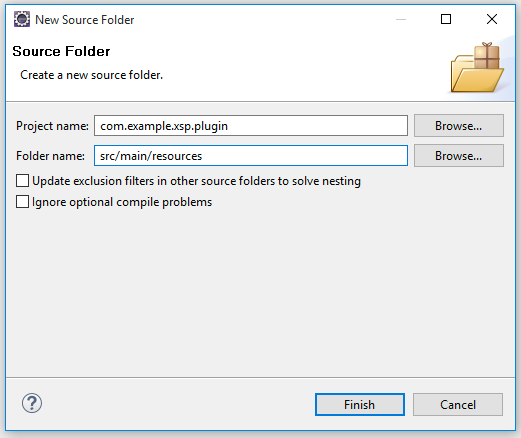 Right-click on this newly-created source folder and choose New → Other, and within the dialog choose "File" from the "General" section: 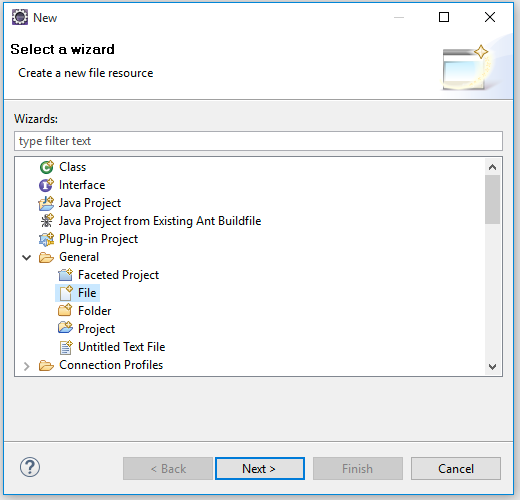 On the next screen, name the file "beans.xml" and click Finish: 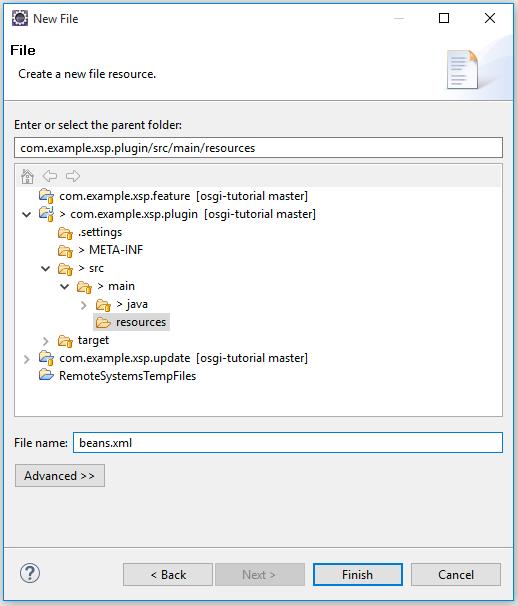 Most likely, Eclipse will open the file on the "Design" tab, which is pretty useless for this - it's better to switch to the "Source" tab. In this file, fill in the basic faces-config structure and an entry for the managed bean:

Now that we have this file, we have to tell the XPages runtime to actually use it as a faces-config file. To do that, go back to the ExampleLibrary class and implement the getFacesConfigFiles method, which lists the XML files from the plugin to contribute to the environment:

The "@Override" bit above the method is indicating to the compiler that you are intentionally overriding a method declared in the superclass or interface - this is to help you ensure that you keep the method names correct for any code calling them.

Now, there are two minor remaining items to take care of before we deploy: exposing the class to Java code elsewhere and making sure the newly-created source folder is included in the build.

To do the former, open up the MANIFEST.MF file and go to the "Runtime" tab. Here, we can list the Java packages that should be available to code within the application (or other plugins). Since we'll want to have code that accesses the bean directly, add the "com.example.xsp.beans" package to the "Exported Packages" list:

This is important to do for any new package that is going to be accessed externally.

Next, go to the "build.properties" tab of the MANIFEST.MF editor (or open the build.properties file directly) and add the src/main/resources folder to the list of source folders:

The syntax of this file takes a little getting used to - the backslashes on many lines indicate that the next line should also be part of the same definition, but is split up for legibility.

With that, we're all set on this side. Head over to the site.xml file in the update site project and click "Build All" to build a new version of the plugin. Once that's done, go to the Update Site NSF for the server and import the new build, and then restart task http on the server console. Similarly, use the File → Application → Install routine in Designer to install the new version of the plugin there, and relaunch Notes.

Now that the bean is installed, you can test it out to make sure it's working by creating a new XPage in an app on the server with this content on the "Source" tab:

When you launch the page in a browser, it should say "hello from ExampleBean". To try out the static get() method we created, change the XPage source to:

When you view that, you should see basically the same thing, prefixed with "the bean says: ". Whenever I make a change to test something that should have the same visual result, I like to toss in a small variation to make sure that my changes did, in fact, take effect.

For a lot of cases, this step may be all you need - many XPage libraries consist primarily as storehouses for Java classes and a few managed beans. The next couple steps are going to deal with some variations on this, plus some nice-to-haves.

Someone should add a version of ExtLibUtil.resolveVariable that doesn't need two parameters. Oh wait, you already did! (and thanks)

Indeed! I was tempted to use it in the example, too, but I didn't want to add a "install the latest ExtLib" diversion, wise as it may be to do so.

Don't forget the usual commit to your git repository.

Ah, merde, I did forget. I'll put that in tomorrow's post.