So it appears that I once again forgot to commit my changes. Well, consider this a cautionary tale, but we can still salvage the situation a bit by committing the previous changes before embarking on an unrelated modification - it's that mixing of different changes that can cause trouble in a source control repository. 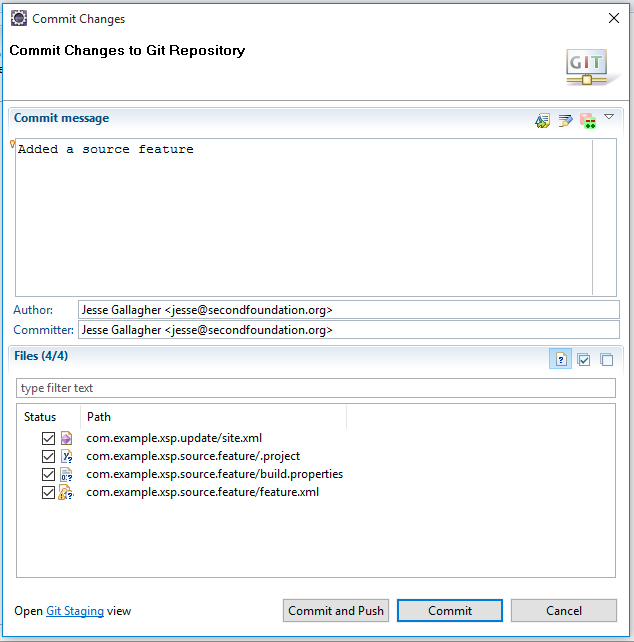 For today's post, we'll add a third-party Jar to our plugin in order to use it internally and provide it to external applications (and we'll cover why those are distinct things).

The Jar we'll use is Apache Commons Lang, because it's a nice simple case without complicated dependencies. Embedding it inside a plugin is actually not the ideal deployment strategy for this, since it already contains OSGi metadata, but this setup is often the most expedient.

To start, download the latest binary release from their site and extract the Zip. Now, in Eclipse, right-click the "com.example.xsp.plugin" project, choose New → Folder, and name it "lib". Then, right-click that new folder and choose "Import...": 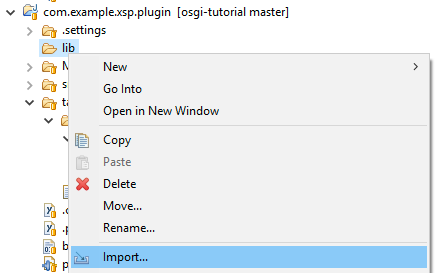 Then, choose "File System" from within "General":

On the next pane, browse to the extracted folder and, within Eclipse's file-picker list, choose the binary Jar: 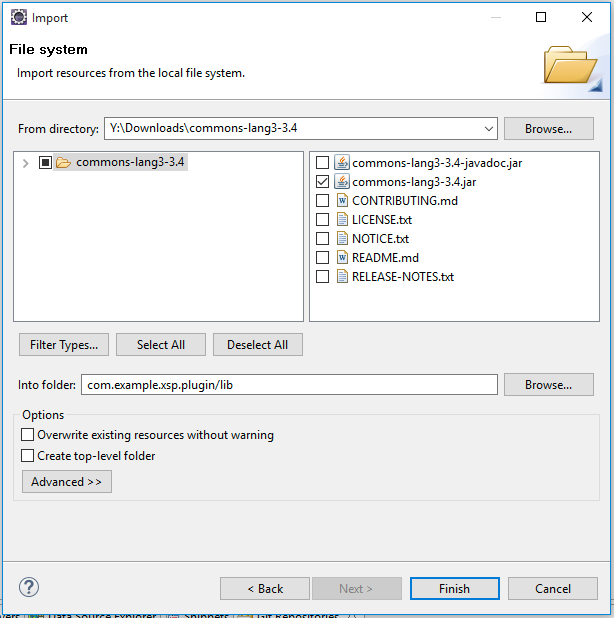 Next, we have to make sure that this Jar file gets included in the final build and is available to classes within the Jar. To do that, open the META-INF/MANIFEST.MF file and go to the "Runtime" tab. In the "Classpath" section, click "Add...", and find the newly-added file: 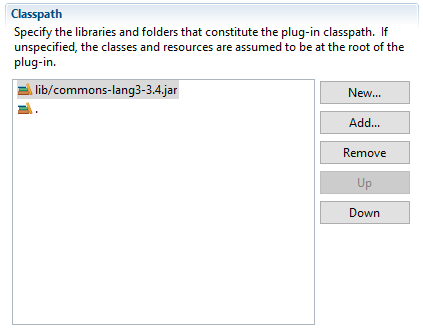 This does two things: it adds it to the plugin's internal classpath (specified in the MANIFEST.MF file) and, as a convenience in Eclipse, adds the file to build.properties (which controls what is included in the build). If you go to the "build.properties" tab, it should look something like this:

You should also see the Jar within your project list - being at the top level with this "jar of bits" icon means that Eclipse knows that it is included in the project's classpath: 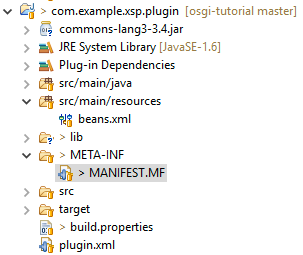 At this point, the Jar's classes are available for use inside the plugin itself, but not exposed to the outside world. So we could add a method like this to the ExampleBean class and then call it from an XPage:

As an aside, sometimes Designer doesn't quite obey the normal rules of OSGi visibility, but Domino does, so you can fall into a trap with packages that aren't marked as visible but are still accessible in Designer.

Sometimes we do want to make these classes visible to downstream users, such as when the point of including the Jar is to distribute a set of foundational libraries used across apps. To do this, go back to the MANIFEST.MF file's "Runtime" tab. Now, click the "Add..." in the "Exported Packages" section. You should see all of the Apache commons packages - select them and click OK: 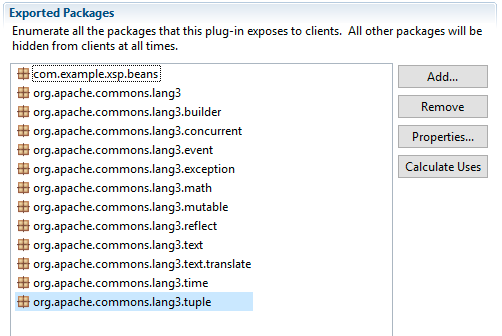 Now, when you build and install this plugin, the classes will be directly available in your XPages applications. This can be a good way to take a handful of Jars you may have sitting around in your jvm/lib/ext folder and distribute them in a better way. It's not the best way, since it misses some OSGi advantages like source and Javadoc for the embedded classes, but it can be much simpler than doing it "right".

Now, commit the changes for today: 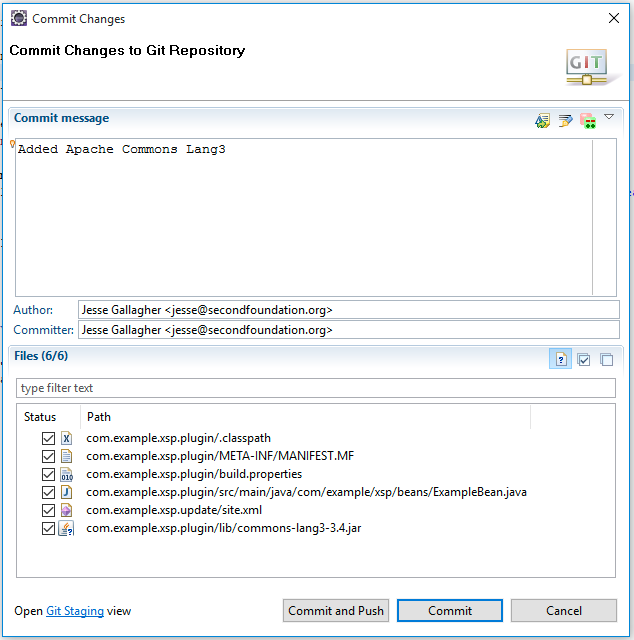 In the next post, we'll add some web resources to the plugin and make them available in a theme and able to participate in resource aggregation.

I could not get Designer to recognize the exported packages outside of the plugin ("cannot be resolved" error) until I edited the feature.xml file and checked the "Unpack the plug-in archive after the installation" option for the com.example.xsp.plugin.