My company is currently dealing with a client that wants us to look into Single-Sign-On options to integrate with their portal. Since this client has a lot of money, I've been doing just that lately. The keywords are straightforward: they want single-sign-on using SAML. Gotcha!

Step one: search for the keywords. There are a couple promising links:

The first one is an overview article that has two followups, but the only one that mentioned SAML is the first, and only in passing. Right. The second one is a notes.net forum posting asking if it's possible to use SAML to authenticate with a Domino server. No replies.

But the page I found, part of a help DB for the program, contained a kernel of promise: Domino is listed as one of the usable directory stores. Now, I'm not sure if that means this thing will allow you to sign INTO Domino, or if it will just let you sign into OTHER stuff using names FROM Domino, but it's worth investigating, right? 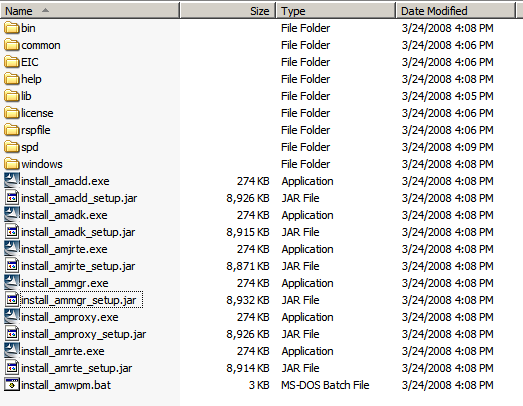 So I put it aside for now. I find some other downloads, such as one that seems to be what I was originally looking for, the Federated Identity Manager. I had a horrifying time with this, including a foray into WebSphere, before I decided to come back and take a whack at Access Manager again. I found the problem this time! You see, since IBM decided that useful file names are for wusses, their downloads are named things like "C1AV9ML", and I, as I always do with Domino, renamed it something useful, "Tivoli Access Manager Base - C1AW2ML", and extracted it into a folder of the same name.

If you're familiar with IBM, or if you have arrived at the present day via a time machine from circa 1990, you may see the problem immediately: the spaces. I mean, sure, Windows has had spaces-in-the-filename support since at least 1995, so not accounting for them was an amateur mistake fourteen years ago, but here we are. I renamed the folder, clearing out spaces, and voila! The installer launched!

It was very promising, too, asking me what directory I wanted, what the Domino server name was, and everything. But when I installed it, it failed, telling me only that it failed and that I should probably check a log file (which I guess it was unable to do itself). When I did, I noticed this suspicious text:

Oh god. What is in the "TivSecUtl" folder, exactly? Surprise surprise:

Excuse me? There's a folder in the directory tree that was in the zip file that IBM made that it simply can't use because they don't know how to escape spaces? Let me reiterate:

IBM's installer can't work out of the box.

There's already the whole issue that they use these horrible Java-based installers for their "Enterprise" apps. When the main problem is how weird it is that Lotus Notes uses a platform-native installer while Lotus Domino uses something that looks like it was mugged by X11, it's just weird. But when the JVM initialization takes up as much time as the entire rest of the installation, and you have to sit through it half a dozen times because you keep having to make more changes to the installer script, it's like IBM is punching you in the face.

The only theory I can come up with is that IBM doesn't actually want you to use their software. What other explanation is there for an installer package that simply doesn't work? It's not a OS version issue, or a weirdo setup issue, it just doesn't work.

This is even beneath the callous explanation that they do it so they can charge for support contracts. The RIGHT way to lock customers in to painful support is to at least make the program INSTALL and provide a basic level of functionality that is ALMOST what people want, but then make getting from there to the goal like wading through an ocean of steel briars. Like Notes, for example. At least that shows a basic level of respect, not just letting the programmer zip up whatever in-development folder he had and uploading it to the software catalog.

It makes all the stupid crap like mysterious line breaks in rich text on the web seem almost user-friendly.

I generally do a lot of ranting about Lotus Notes, so I figure it's only fitting that I make a blog about it.