In the latest release of the OpenNTF Domino API, the installation process has changed a bit, which is most notable for Designer. The reason for this is due to the weird requirements in Designer for properly getting source and documentation working.

When downloading the file, instead of the previous Eclipse update sites, there are two Update Site NSFs: one for Designer and one for Domino. There are a couple ways you can use these:

There's an important note about the Designer install: due to the restructuring of the plugins since the last release, it's probably safest to remove any existing installation first. You can do this via File → Application → Application Management: 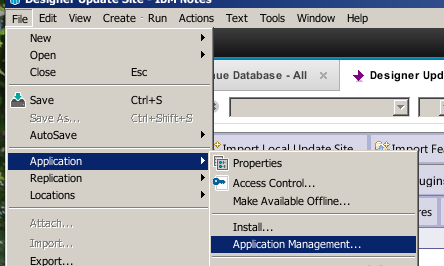 Find any "OpenNTF Domino" features and uninstall them each in turn:

After that, proceed with installing the API normally from the provided NSF Update Site or your own.

I'm not sure I get this bullet point:

It seems to imply that by installing via update site you get the API itself but not any of these additional bundled plugins.  Is there another install mechanism to activate them?

The parenthetical refers to the notion of not using any other OSGi plugins already. You're right that it's ambiguous, though - I'll scuttle it.

I'm a little confused about this release now.
Before, I was using the plugin in the workspace-dots enviroment for my tasklets. Everything was working. The new plugin, which is also considerably bigger in size, makes references to org.openntf.domino package break. Simply the project doesn't find it anywhere anymore.

If I expand the plugin now I notice the presence of core.org.openntf.* packages.

Sorry for the dumb question but the rare times - sigh - I get back to OSGi I unfortunately have to wrap my head around this ever changing stuff.

I haven't done it, but I would imagine that the workspace-dots folder should get the same plugins/features that Domino-the-server gets, not the Designer ones. The core source of the trouble is the different (likely broken) handling of packaged jars between the server and Domino. With one method, the server will happily work with the library but Designer will balk (and see things like that faux "core.org.openntf.*" packages, which are not real but are instead a symptom of the problem). With the other method, Designer will see everything great, Javadoc and all, but Domino will refuse to load the included jars, breaking required dependencies.

In short: it's a drag, but it's an unfortunate side effect of the growing breadth of the API.

Hello, I have this problem....have you some suggest?