In the last post, we created an empty plugin project for our XPages library. Today, we'll flesh that plugin out a bit and add the actual XSP hooks.

The first step is to start filling in some details in the plugin's Manifest file, which is the core description of what the plugin does and what it requires in its environment. To begin with, open the MANIFEST.MF file in the META-INF folder of your project and check the "This plug-in is a singleton" checkbox:

During one of the steps later, Eclipse would have yelled at us to do that anyway. This checkbox means that the plugin expects to be the only one of its kind active on the server. This is because it will contribute to the XSP Library extension point, and it should prevent duplicate contributions of the same library from different versions.

Next, go to the Dependencies tab of the Manifest editor, click "Add..." in the "Required Plug-ins" section on the left, and add "com.ibm.xsp.core": 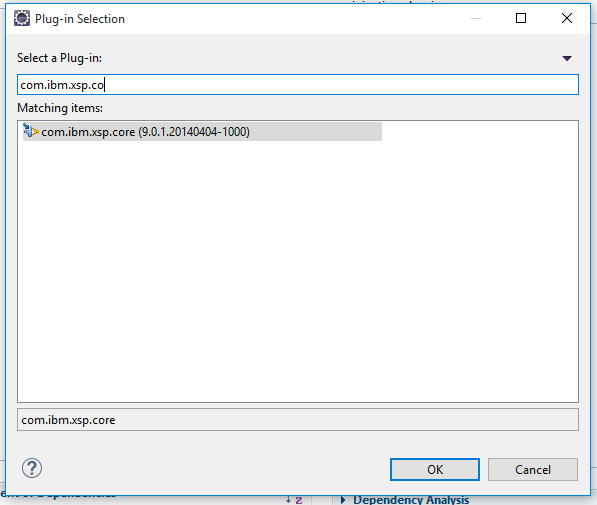 Do the same with "com.ibm.commons":

Now, save and close the Manifest. The next step is to fix up a minor problem I forgot about in the last post: the base package name. By default, the base package is named after the plugin project, which means it now contains a redundant "plugin" part. That's not a problem per se, but it's not needed, and this will be a good introduction to Eclipse refactoring.

Expand the "src/main/java" (or "src" if you left it as the default) package folder within the project, then right-click on "com.example.xsp.plugin" and choose "Refactor" → "Rename...". Change the name to "com.example.xsp", make sure "Update references" is checked, check "Update fully qualified names in non-Java text files", and click "Preview". This should list a couple changes - Eclipse looks for references to the class in both Java and non-Java files to try to cover all of the bases. In a larger project, there may still be lingering references elsewhere, but in this case it does everything for us. Click "OK".

It's possible that there may be a small detour at this point. On my machine, I noticed a strange problem in Eclipse after making this change: it set the output folder of the project to a nonsense directory within the source. To make sure this isn't happening, double-click on build.properties and go to the "build.properties" tab. Make sure the "output.." line reads output.. = target/classes (or output.. = bin if you left the defaults). This is the file that controls many of the compilation settings for the plugin, and this specifically specifies the location for the compiled Java classes.

Now, time to expand the Activator a bit. Expand "com.example.xsp" and open the "Activator.java" file. The Activator class is an optional but there-by-default class that provides a couple hooks during the lifecycle of the plugin. For XSP libraries, there's usually not too much going on here, but it can serve as a useful coordinating and debugging point.

One such potential use is a centralized logger configuration. At least for now, we'll just use the basic JVM logging classes, since "proper" OSGi logging is a whole thing. With the addition of a logging property and initialization message, the Activator looks like this:

The static block that sets the log level is a good trick to know about: that block executes once, when the class is first loaded. It's distinct from a contructor, which turns each time a new object of the class is created. It may help to think of the static portions of a class (the properties, methods, and this block) as a sort of special singleton version of the class created by the runtime. This sort of thing is non-obvious to new Java developers, but it starts to make sense after you do it for a while.

With the Activator in place, the next step is the actual XPages library class, which provides the specific details about the plugin's XSP interactions. Right-click on the "com.example.xsp" package and choose "New" → "Class" (if "Class" doesn't appear in that list, choose "Other" and then find "Class" within the "Java" folder). In the "New Java Class" dialog, click "Browse..." in the "Superclass" line around the middle, and look for the class AbstractXspLibrary:

Set the class name to "Example Library" and leave everything else as the defaults: 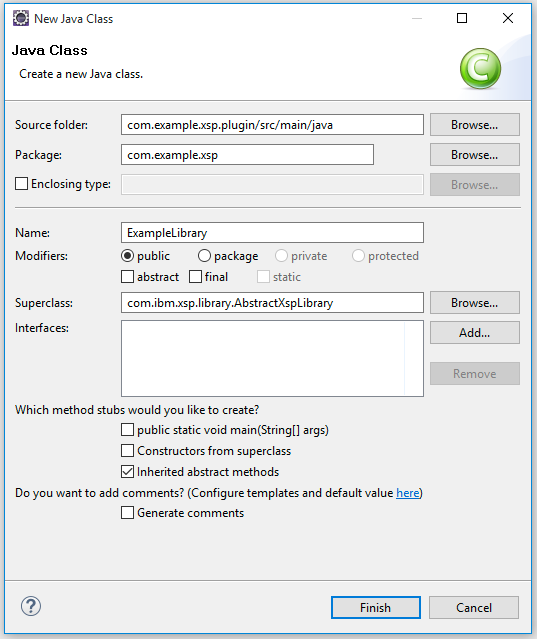 When creating the class, it will fill in a single required method: getLibraryId(). This method's job is to return a string that should be unique across XPages libraries, and which will show up as the library's identifier in Designer. By convention, this is related to the Java reverse-DNS name you're using, plus a suffix like ".library":

There are a number of other methods, though, that are worth overriding in a normal plugin, related to the plugin setup, the other XSP libraries it depends on, and its versioning. This is a reasonable baseline for a modern XPages library that will use the Extension Library:

With that class in place, there's one final step for making this plugin a proper XSP library: the extension point. Extension points are how the XPages runtime knows which plugins provide libraries like this. Open the MANIFEST.MF file again and click on "Extensions" on the right side of the first page:

Eclipse will ask you if you want to show the hidden Extensions panel, which you do. On that tab, click "Add..." and choose "com.ibm.commons.Extension": 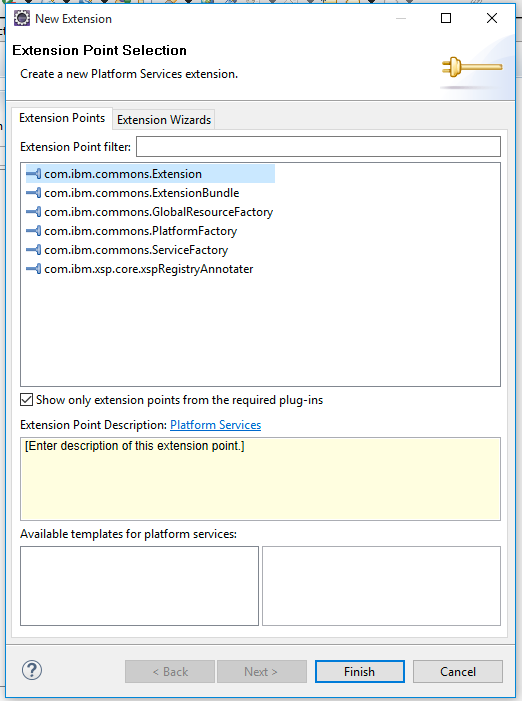 Once added, there will be two fields on the right side. In "type", enter "com.ibm.xsp.Library". In "class", click "Browse" and search for the name of the library created earlier, "com.example.xsp.ExampleLibrary". Once this is added, you should be able to click on the "plugin.xml" tab in the editor and see something like this:

There will also be a file named "plugin.xml" in your project.

After all that, we have a functional basis for our plugin. There are definitely a lot of things to remember in this process, but they start to make a sort of sense the more you do it.

With that set, commit your changes, where you can see the moved Activator file and the addition of the Library stuff: 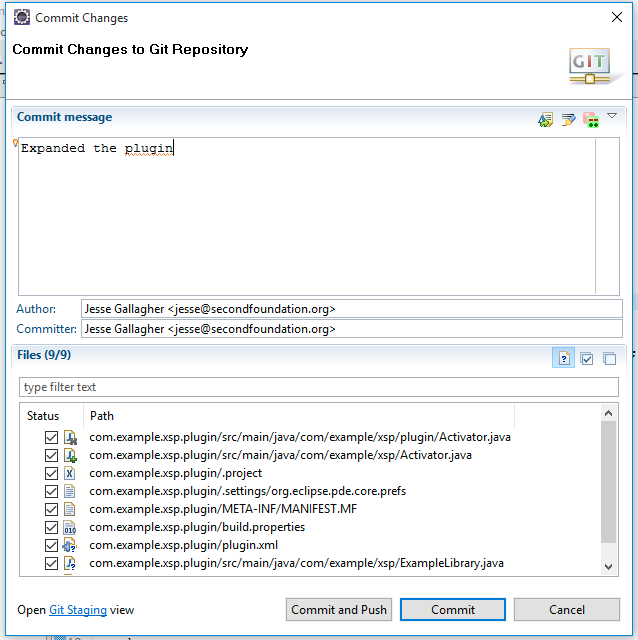 In the next post, we'll create the feature and update-site projects needed to actually install this plugin in Designer and Domino.

That is a lot to remember. Good documentation, now hopefully my commit message is descriptive enough