I said that the next post was going to be about authentication or databases, but I'm turning that into a filthy lie. Instead, we're going to take a bit of a detour to talk about a couple ways to let the IDE help you out in development. I'll be talking about Eclipse specifically, but I know that at least the paid version of IntelliJ IDEA has similar features. The first feature on the docket is having the IDE manage an app server for you.

Up until this point, we've been using the TomEE Maven plugin to create and launch a server for us, which is convenient and portable across whatever environment you're working with. However, once you have a couple applications or want to make persistent server configurations outside of the individual app's pom.xml, it makes sense to run a server and deploy the app to it.

This is where Eclipse's "Servers" view comes into play. If the panel isn't currently in your workspace, go to Window -> Show View -> Other... and choose "Servers" under the "Server" category. By default, it'll be stacked with some other tabs, but I like to position this pane in the bottom-right of my IDE: 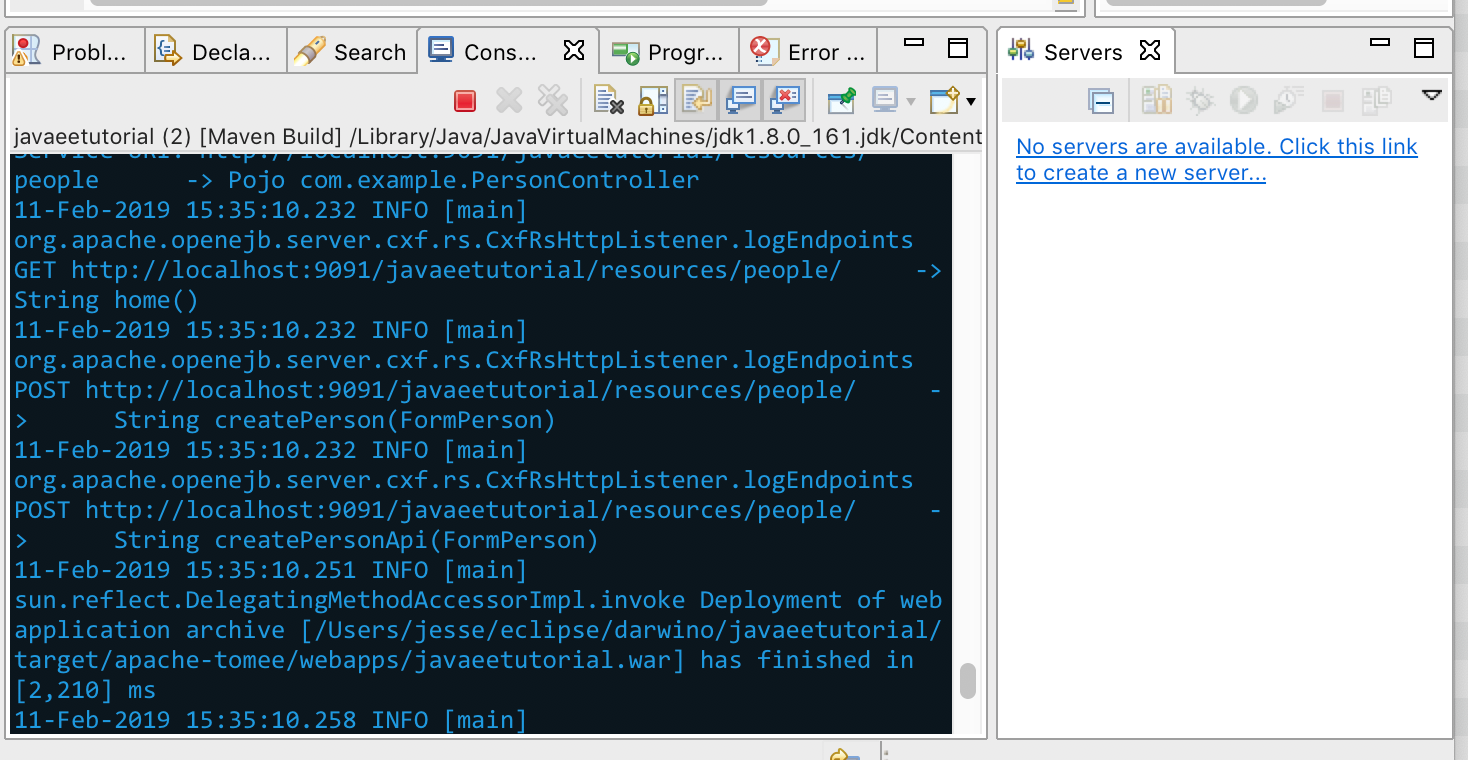 The way this view tends to work is that it points either at a local server installation or to a running remote server. We'll want the former, but, sadly, this is where we part ways with TomEE. Though the server is more than capable for our needs, the Eclipse integration (based on base Tomcat) is not, and it hinders its use here. Instead, we'll be switching to my current favorite: Open Liberty. Download the latest build from that page (19.0.0.1 as of this writing) and extract the archive to some location on your system (I like to keep a directory of various app servers).

Next, we'll need to install the Liberty support plugin in Eclipse, which is a fortunately-simple matter. Visit the Liberty in Eclipse download page and drag the "Install" button onto your Eclipse toolbar. Once it loads, click Next and Finish a couple times until it's done, and then let it restart Eclipse.

Once Eclipse restarts, click that "Click this link to create a new server..." link. In the resultant dialog, choose "Liberty Server" under the "IBM" category and give it a descriptive name: 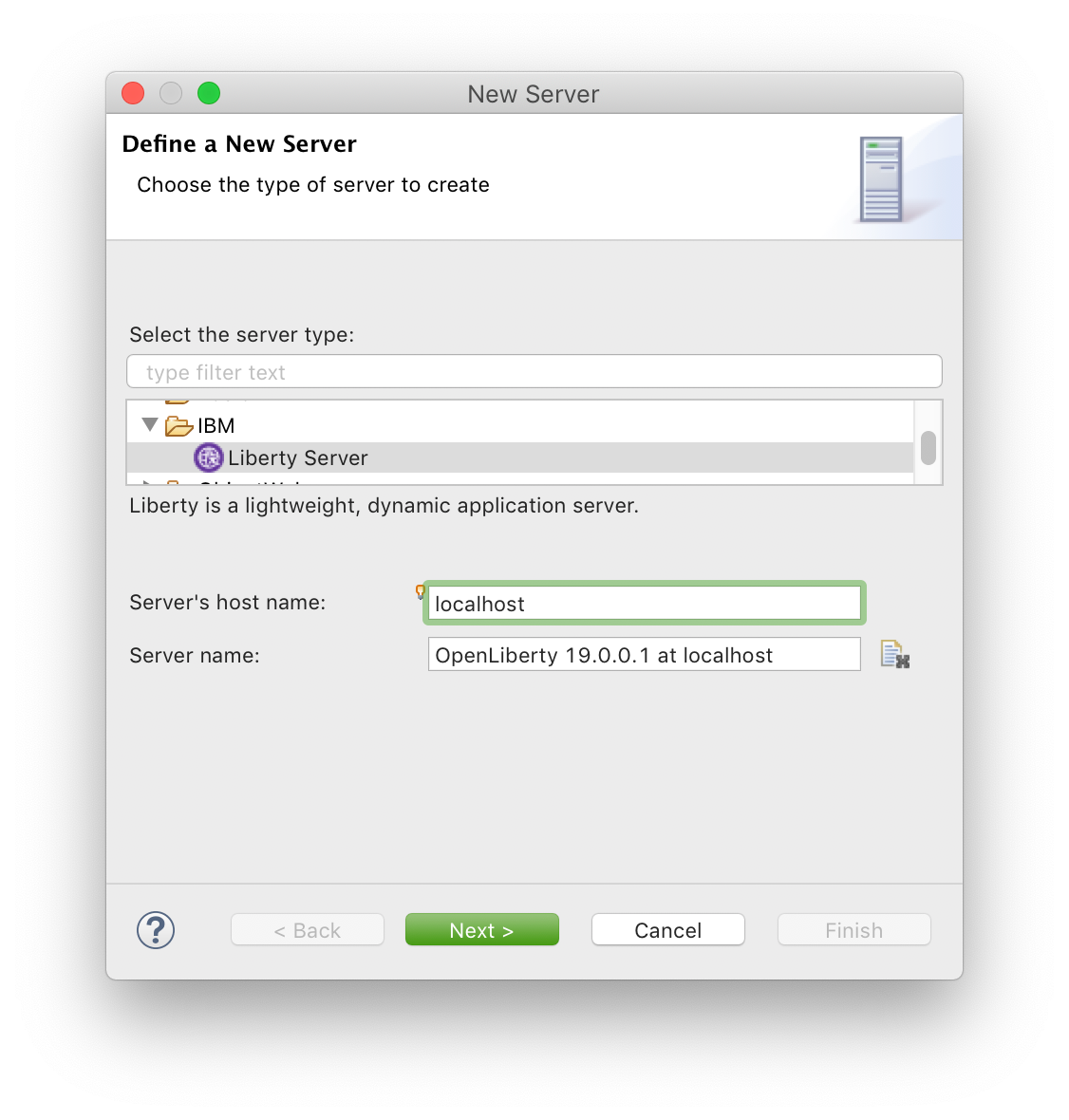 Click Next > and enter the path where you extracted Open Liberty in the "Path" field: 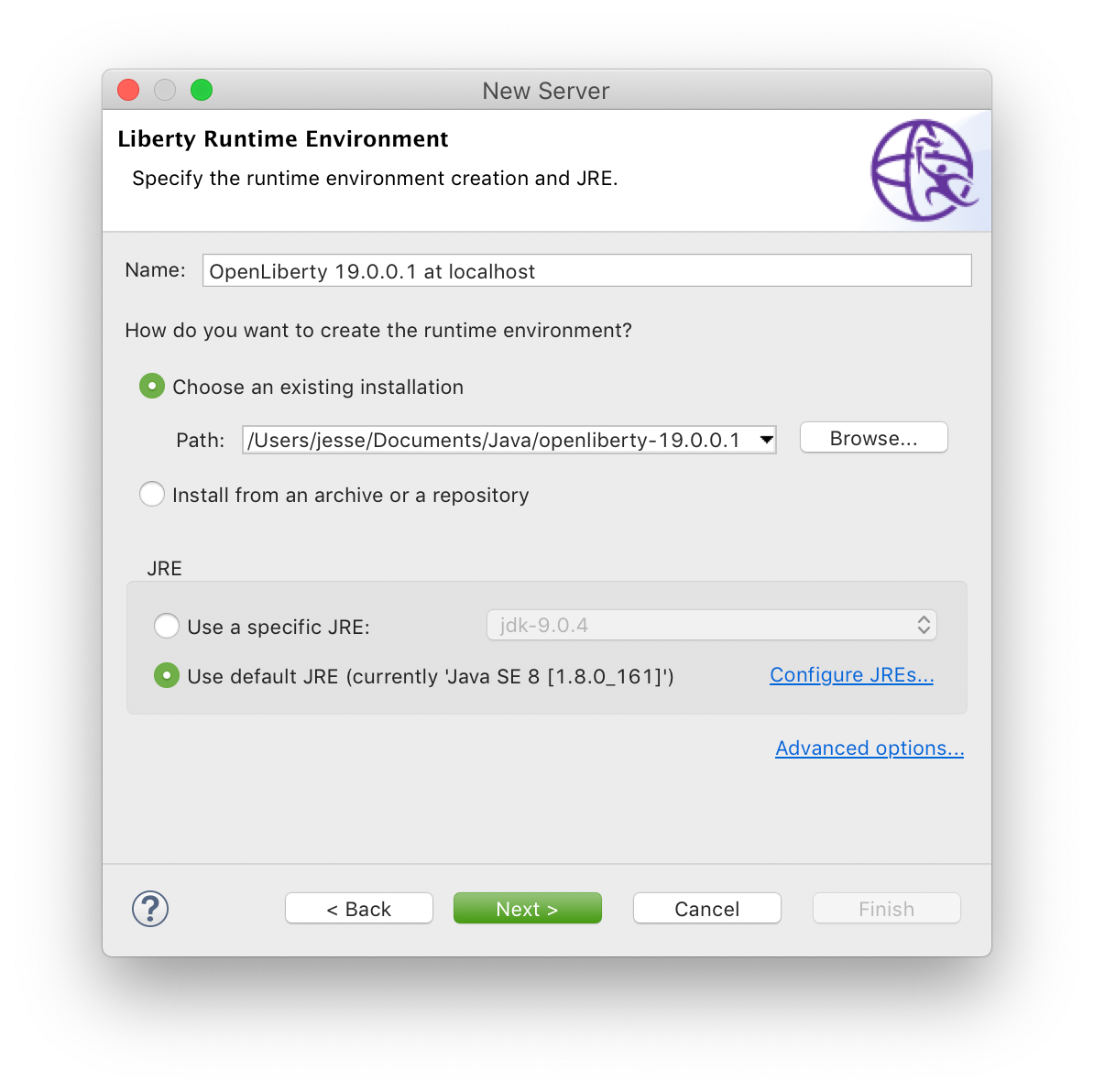 Click the twistie next to the newly-created server and double-click the "Server Configuration [server.xml] new server" entry to open the server config editor. If it opens on the "Design" tab, click the "Source" tab to see the XML configuration. Set it to:

The first difference here from the default is to swap out the jsp-2.3 feature for javaee-8.0. Liberty organizes its capabilities by "features" in order to let you really trim down the runtime if you don't need specific capabilities. For our sake, we want the whole EE shebang available, though. localConnector-1.0 remains, and is what allows Eclipse to control the server.

We also changed the httpPort of the httpEndpoint element to 9091 to match what we've been using via the Maven config. We also added a basic not-exactly-secure keyStore configuration. This would be filled in more if you enable SSL.

There are several ways to actually get our app onto this server, but the one I've built up a habit of using is to right-click the project, and then select Run As -> Run On Server: 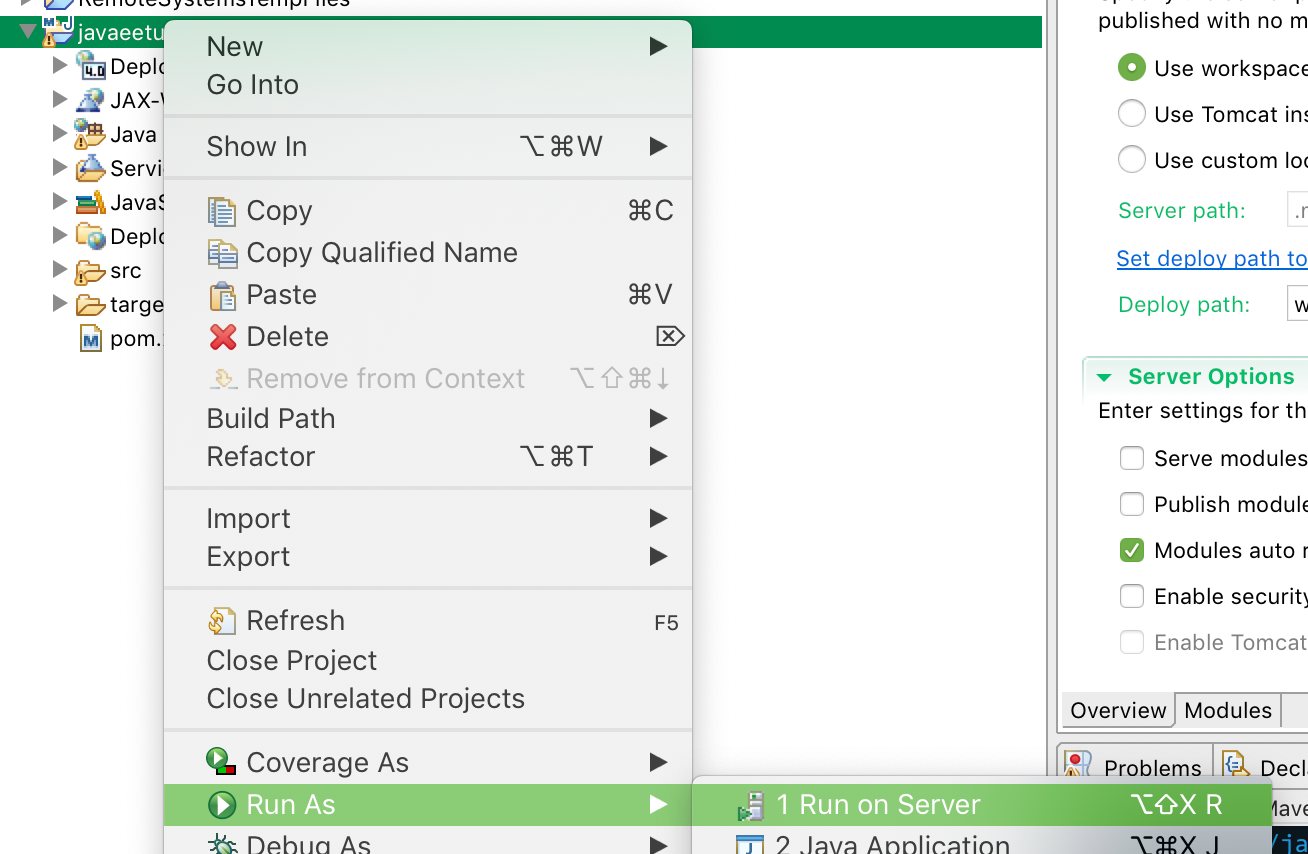 The newly-created server should be selected by default in the resultant dialog, so just click Finish immediately.

The server will churn for a bit and eventually output [AUDIT ] CWWKT0016I: Web application available (default_host): http://localhost:9091/javaeetutorial/. It will also, I note with chagrin, output this:

That's because I forgot a step in the setup of MVC controllers yesterday, which is that you're supposed to add one of those annotations to the class too. Fortunately, the examples still work, and we'll fix that omission next time we edit the code.

Most likely, Eclipse will automatically open the app's default page in whatever browser it's configured to use - by default, a browser embedded in Eclipse itself.

In future posts, rather than specifically saying to run the clean install tomee:run Maven goal, I'll just say to run the app - either way should still work. By default, Eclipse will re-deploy the application to Liberty after changes, so you probably won't need to do anything other than refresh the page to see future changes.

Next, I think I'm going to cover a grab bag of other features Eclipse has for working with Java EE apps before returning to the dirty business of writing code.