In today's post, I'd like to go over a bit of how the NSF ODP Tooling project is organized, and specifically how I structured it to support both server-based and local compilation.

Setting aside the feature, update site, and distribution modules, the tooling consists of seventeen code-bearing components: 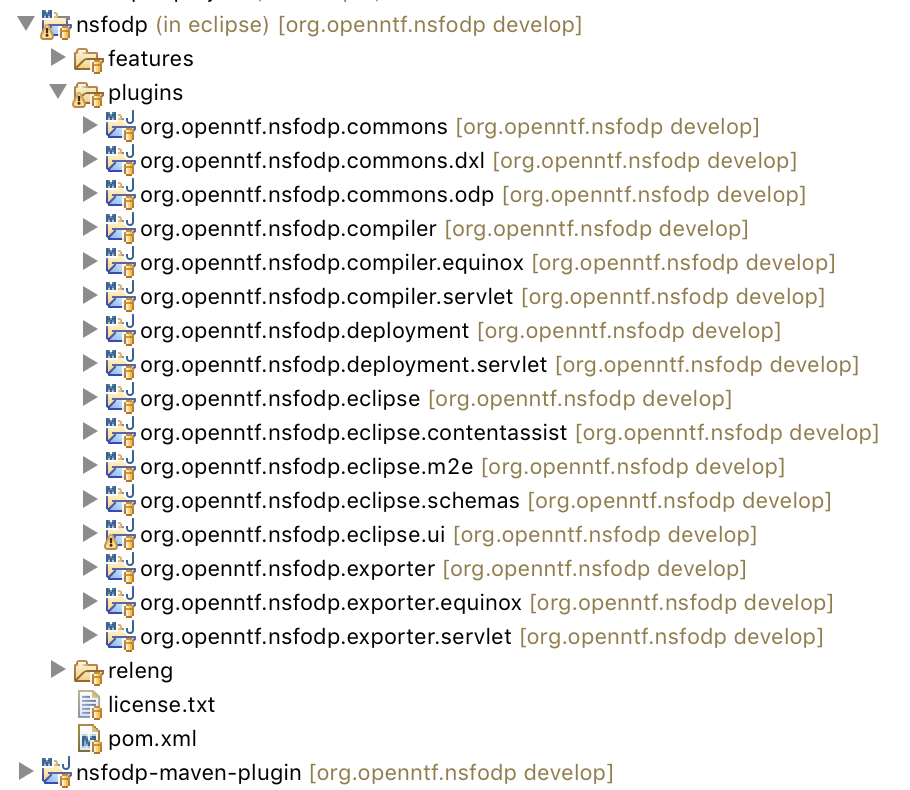 For our purposes today, we care about the first six in the "plugins" directory and then the "nsfodp-maven-plugin" at the bottom - the rest have to do with the different capabilities of the suite.

The three "commons" plugins contain a set of utilities and data-description classes, and they're broken up into those three modules due to differing dependencies. The core "commons" plugin relies only on org.eclipse.core.runtime, while the "dxl" plugin adds an IBM Commons dependency, and finally the "odp" plugin relies outright on a Notes/Domino runtime. By keeping these things distinct, it lets me keep track of which things are safe to include in the Eclipse UI plugins or the Maven plugin, where I can't count on the present of a Notes runtime.

The compiler, like the other "action" components of the Tooling, is split up into the core "compiler" plugin that does the actual heavy lifting, and then two "interface" plugins for running the code from different directions.

The "servlet" plugin came first and is the mechanism by which a local Maven-run plugin communicates with a remote Domino server with the Tooling installed. It contains a primary entrypoint servlet that accepts a packaged zip file from the client containing the ODP and any extra update sites to use while building, as well as a set of HTTP headers describing the various parameters that can be set for compilation. Strictly speaking, this plugin doesn't depend on Domino as such, but rather on having a servlet container and a Notes or Domino runtime - it could hypothetically run in e.g. Tomcat with the right dependencies, but in effect it's the "Domino side" of it.

The "equinox" plugin supports local compilation and it's a bit of an interesting beast. Since the compiler is intended to work with any given NSF and XPages application, it has a hard requirement on the presence of an Equinox ("Eclipse-style") OSGi runtime. A local Maven build doesn't use Equinox, so I wrote this plugin to provide what Equinox refers to as an "application" - essentially a named executable class that can be run once you initialize an Equinox runtime. Eclipse itself uses this mechanism for running, and you can see these in action in the "Eclipse Application" run configuration type in Eclipse-the-IDE:

The code itself behaves similarly to the servlet, but can skip the "zip container" step of the process, instead referencing the local files based on system properties set by the Maven bootstrapper.

Having these two entrypoints lets me keep the actual business of the compiler independent. Depending on need, I could add any number of other entrypoints without having to modify the core code at all.

The actual action of the process is kicked off by a Maven plugin, which consists of what Maven calls a "mojo". It's effectively the same idea as the Equinox application: a specially-tailored executable class. In this case, it gains the ability to specify parameters that are passed in by the pom.xml configuration or via the command line, which are then available by the time the Maven runtime calls the execute() method.

When run, the Maven mojo branches based on what type of compilation it can do. The servlet-based compilation branch is a little wordy in the class, but conceptually simpler than the local compilation. The mojo creates a temporary zip file, pours the ODP into it, and then adds in any update sites to include. Then, it creates an HTTP connection to the remote server, adds headers to configure the compiler, sets the POST body to the zip file, and then lets the server do its thing.

The Equinox runner, though... that's something that took a surprising amount of fiddly magic to get working. On a conceptual level, running the compiler in a local Equinox container is essentially the same thing as the Equinox container launched by the Domino HTTP process - same Eclipse runtime, same infrastructure, and so forth. However, the trouble came in both in some of the fiddly ways that the Domino OSGi runtime is configured and in the assumptions it makes about the active JVM, and the battle resulted in a complicated bootstrapping process. The Notes JVM comes packaged with a handful of critical jar files, not the least of which being "Notes.jar", and those need to be added to the active classpath, which in turn needs a specialized provider plugin to get Equinox to see them. There's also whatever the heck "JEmpower" is, which has its own special needs to be wrapped up into a "shim" OSGi plugin because of the way other plugins depend on it. The runner is also riven with special behavior for running on recent macOS Notes builds, which switched to an embedded non-J9 JVM (I wouldn't be surprised if this changes subtly again in the future). This is all in service of creating a compatible Equinox configuration so that, finally, the compiler can be run in a child process. It's not pretty, but it works.

Since the process can take a while, I created an extremely-bare-bones messaging system, where the server sends out a series of JSON objects delimited by newlines and the client watches for these and emits human-friendly messages. The compiler process itself just uses an Eclipse-style IProgressMonitor - the servlet uses an implementation called LineDelimitedJsonProgressMonitor, while the local Equinox runner uses one that just prints to the console directly. This is another area where things are kept generic enough at the internal level so that a different mechanism entirely could be hooked in - a GUI progress monitor, for example.

I'm pretty pleased with how the structure of the Tooling has taken shape. Being able to separate out the entrypoints like this definitely made it much easier to have the local compilation, and breaking it all out into multiple modules kept me from baking in any incorrect assumptions about the runtime environment in the core code. I've been toying with ideas for how to get this stuff to run in an Eclipse/IntelliJ/etc. environment, and I think the Maven Equinox runner will provide a pretty good template for that. There'd be a lot of work to make that good, but it'd definitely be possible.